Architect studio ADX made a feature of the soil excavated from the building site of this Minamisōma home, Soil House, created for a client who was displaced by the 2011 Japan earthquake.

The owner of Soil House in Fukushima Prefecture had to move to temporary housing and manage the separation of his family after the Tōhoku earthquake in East Japan, which uprooted more than 300,000 people.

The owner's former home had been immersed in nature, and although he decided to move to a more dense residential area after the earthquake, he wanted architects ADX to evoke that same connection to the earth.

Initially, ADX addressed this by designing the landscape first and then situating the single-storey home within it.

The distinctive trapezoid walls of piled sand came about when the architects went to remove surplus soil from the site but discovered its removal cost was more than estimated.

It made them consider how the sand could be incorporated into the structure instead, in the spirit of further connecting the house with nature.

It also led them to recall the joy of playing with sand as children, which inspired the walls' shape and placement.

To bond the soil and make it structurally sound the mounds have been sprayed with expanded polystyrene foam.

ADX believes the soil walls add to the home's peaceful and energising elements. 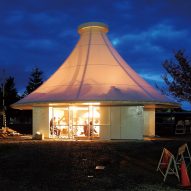 "We wish this house will inspire people to think about themselves, their family, the region and society in a comfortable and peaceful way," they continued. "Moreover, we desire this house built with local material to remain in their hearts as a symbol of the region."

The main structure of Soil House is made of wood and the floor area totals 137 square metres.

To further the connection with nature, the house has windows that fully open along one wall, allowing views of the soil from outside and the garden from inside. Glass partitions within the home also create sightlines to nature.

The house has two bedrooms, plus a third room that can be used as a guest bedroom. This room is in the Japanese washitsu style with tatami flooring and sliding screen doors.

Another Fukushima house that honours the earthquake is local architect Cohta Asano's own home, which features nine intersecting volumes that form open interiors.

This year marks a decade since the earthquake, which also triggered a tsunami and nuclear disaster. The architects behind 16 relief shelters built in the aftermath recently shared their thoughts on the buildings' legacy.

Photography is by Nao Takahashi.