Mexican architect Daniela Bucio Sistos has created a red brick and coloured concrete house in Morelia, Mexico, that features round windows and a disc-shaped canopy over a courtyard.

Called Casa UC, the house is located on the outskirts of Morelia, the capital of the central state of Michoacán.

Situated on a long, trapezoidal site, the house consists of rooms arranged around courtyards and pathways.

The home is largely opaque on the front and sides to preserve privacy and reduce noise.

The main facade is found on the east, where the architect placed a solid, brick wall fronted by a paved area for cars. A metal framework helps shade the parking spots.

"Casa UC doesn't say much on the outside," the architect said. "The main entrance is tucked at the end of the textured partition wall that runs along most of the front of the property."

The entryway leads to a courtyard at the heart of the residence.

Above the open-air space is a round canopy with a circular cutout at its centre, allowing a tabachin tree planted underneath to grow right through the opening.

"The circular foyer is the guiding axis of the residence, and symbolically it is taken as the starting point for the radial floor that runs throughout the project," the architect said.

Arranged around this vestibule are enclosures made of red brick, pigmented concrete and glass. The bricks were laid in a non-flush manner, alternating between protruding and receding – resulting in walls with a textured appearance.

The 550-square-metre residence encompasses four bedrooms, a kitchen, a dining area, a living room, and a library. 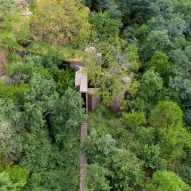 Two large, circular windows were incorporated into the residence and align with the central courtyard.

One of the glazed apertures is adjacent to an interior patio, while the other is found in the library. Both pivot open and closed.

At the back of the home, the residence opens onto a sheltered patio. A curving ramp leads from the living room down to a rear garden lined with a row of cypress trees.

Neutral colours and tactile materials are found throughout the dwelling, including raw concrete and honey-toned caobilla wood.

Rooms are fitted with contemporary yet earthy decor, such as a live-edge parota dining table with chairs wrapped in leather.

The architect sought to create an atmosphere that promoted contemplation and engaged one’s different senses, not just sight.

"Casa UC was always thought as a walkable residence – that when walking through it, the change of textures and scales would make it a space away from the ocularcentrism and more linked to a sensitive interaction with the user," the architect said.

Other homes in Morelia include a white house by Jaime Juárez R Arquitecto that consists of splayed and stacked volumes, and a residence by HW Studio that borrows from the steps and plazas found in traditional Spanish architecture.

Photography is by Dane Alonso and Mariano Renteria Garnica.