As part of our collaboration with Braun, Dezeen hosted a live talk with Ilse Crawford to explore her new masterclass series for the brand.

Moderated by Dezeen's founder and editor-in-chief Marcus Fairs, the talk explored a new three-episode masterclass series hosted by Crawford and created in connection with the German design brand's centenary.

Called Good Design Masterclass, each episode looks at design through the lens of one of Braun's three core principles: simple, useful and built to last. The brand believes these principles are essential to good design.

The masterclasses will see Crawford discuss how the principles can be applied to today's design industry and influence a new generation of designers.

They also explore how we can integrate good design into our day-to-day lives.

Over the coming weeks, Dezeen will publish each of the three masterclass episodes, which are also available to watch on Braun's website.

Crawford is the founder of Studioilse, a multidisciplinary design studio working primarily in interior and product design.

Crawford has also designed interior spaces such as a community soup kitchen in London opened by the renowned chef Massimo Bottura and the VitraHaus showroom in Germany using furniture by Vitra and Artek.

Before stepping down in 2019, Crawford was the head of the Man and Well-Being bachelors programme at Design Academy Eindhoven for over 20 years.

Crawford was also profiled in Netflix's documentary series Abstract: The Art of Design, alongside designers and architects like Bjarke Ingels and Es Devlin. 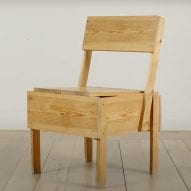 Braun was founded in 1921 and is celebrating its 100th anniversary this year.

The German manufacturer is known for its functional approach to design, established by the legendary Dieter Rams and his protege Dietrich Lubs.

The brand's mission to create "honest, unobtrusive, practical devices" helped establish it as one of the most influential manufacturers of the 20th century.

This talk was produced by Dezeen for Braun as part of a partnership. Find out more about Dezeen's partnership content here.