Associated Architects has unveiled plans for Curzon Wharf, a 53-storey development in Birmingham, UK, that it claims will be the first skyscraper to produce no net emissions in operation.

Curzon Wharf is being developed by Associated Architects with engineering consultancy Cundall using a "fabric-first approach", meaning the building fabric will be super-insulated to minimise energy consumption.

Energy will be supplied from renewable sources, meaning it will produce no greenhouse gas emissions in its day-to-day operation based on the UK Green Building Council's (UKGBC) definition, the consultant claimed.

"The project is designed to be 'net-zero carbon ready' in accordance with the UKGBC definition," said Cundall.

However, the development will not achieve net-zero emissions in its construction, which the UKGBC says is of "equal importance".

"Net-zero carbon for both construction and operational energy represents the greatest level of commitment to the framework," says the UKGBC in its zero-carbon definition.

Achieving net-zero involves eliminating all possible emissions and offsetting the remainder with schemes that actively remove carbon from the atmosphere.

According to the UN's Race to Zero campaign, this is essential if the world is to hit the targets set out in the Paris Agreement and keep global warming within 1.5 degrees Celcius of pre-industrial temperatures.

Associated Architects and Cundall claim Curzon Wharf will be the world's first skyscraper development to be net-zero in operational energy.

"To our knowledge, we are not aware of a comparable mixed-use net-zero tall-building development in the world," Cundall partner Alex Carter told Dezeen.

"It is still in the planning stages, but with the net-zero carbon measures integrated into the current design, Curzon Wharf can be a landmark example of a net-zero carbon development once it is completed and in operation." 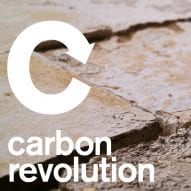 While the scheme's embodied carbon will not be net-zero, the team hopes to minimise these emissions by specifying low-carbon construction materials such as the cement substitute Ground Granulated Blast furnace Slag (GGBS) for the concrete structure.

Embodied carbon refers to the emissions that result from the manufacturing, construction, maintenance and demolition of buildings, which is currently unregulated in the UK.

Curzon Wharf is designed "as a composition of sculptural forms" that will increase in scale towards the north of the site, reaching 165 metres in height at its tallest point.

The tallest tower will comprise 498 apartments over 53-storeys, while the second tallest will contain 41-storeys of student accommodation.

These two towers, which will distinguish the development from afar, are designed to echo the proportions of the nearby BT tower and pay homage to tall industrial chimneys that were once seen on the city's skyline. 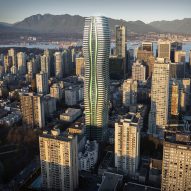 World's tallest Passivhaus building set to be built in Canada

A smaller 14-storey building will be used as a co-living block with 265 units, while offices will occupy a nine-storey structure.

All four buildings will be finished with the same red-hued checkerboard facades, which nod to the city's old brick buildings and industrial architectural heritage.

The checkerboard look will be achieved with alternating Corten steel panels and glass. However, the glass will be kept to a minimum to ensure high insulation levels.

"The early concept stage elevations have been steered by the need to achieve a very careful balance of solid and glass, with a target set to provide no more than 30 per cent glazing," the team told Dezeen.

To achieve net-zero carbon in operation, the building fabric will be super-insulated and designed to Passivhaus principles, while all windows will be triple-glazed.

Passivhaus is an international energy performance standard that dramatically reduces space heating and cooling requirements in a building, as well as its carbon emissions.

All heating and hot water for the buildings will be provided by heat pumps, while on- and off-site renewable sources such as photovoltaics will supply electricity.

Electricity consumption will be minimised to "a very low level" by maximising daylight inside, using LED lighting and smart controls. 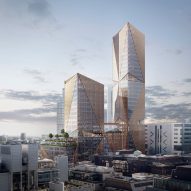 The complex will be complete with sky terraces, winter gardens and tree-lined public plazas, alongside amenity and retail spaces at ground floor level.

The design team has also collaborated with the local council to tie the development in with a wider masterplan and network of pathways, cycle routes, canals and public places.

As part of the series, The Carbon Trust shed light on the difference between the definitions of net-zero and carbon neutrality, which are often oversimplified or confused. Diane Millis told Dezeen that this can hinder some companies' abilities to achieve net-zero carbon emissions.

In another interview, UN champion Nigel Topping told Dezeen that architecture is "one of the least well-represented businesses" in the UN's Race to Zero campaign, despite the fact that the built environment contributes as much as 40 per cent of greenhouse gas emissions.

The visuals are courtesy of Associated Architects.