Last week, we ran a webinar on how to use architectural visualisation tool Twinmotion for those interested in entering our Redesign the World competition. The workshop is now available to watch in full here if you missed it the first time around.

In the tutorial, Anderson covered basics such as how to import 3D files and export renders, how to insert materials and objects like people and vegetation, and how to control lighting and add weather effects.

She also touched on some more advanced tips and tricks, including creating terrains and customising the sky.

The skydome tutorial that Anderson mentions at 38:47 in the video can be viewed here and the FBX file she uses in the demo can be downloaded here.

Further tutorials on the basics of using Twinmotion can be found here, while the Twinmotion YouTube channel features videos showcasing a host of other useful tips and tricks for getting the most out of the software.

Twinmotion is an architectural visualisation tool powered by Unreal Engine, which is a game engine developed by Epic Games.

It enables architects and designers to quickly and easily create high-quality images, panoramas, fly-throughs and animations of products, buildings, cities and even entire landscapes. It can be used to produce standard or 360° VR videos from imported BIM or CAD models. 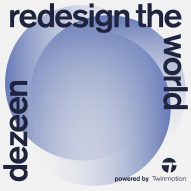 Participants will need to use the tool to enter Dezeen's Redesign the World competition, which Dezeen launched last month in partnership with Epic Games. Entrants can download a free trial of the software in order to do so.

Redesign the World contest open for entries until 15 September

The contest calls for new ideas to rethink planet Earth to ensure it remains habitable long into the future. It is free to enter and has a top prize of £5,000 and total prize money of £15,000. People over the age of 18 of any profession and from any country in the world can enter.

The 15 best proposals will be published on Dezeen in November during our Dezeen 15 online festival celebrating Dezeen's 15th anniversary.

Find out more about the competition at dezeen.com/redesigntheworld.