A courtyard lies at the heart of an urban family dwelling by Canadian firm Leckie Studio that is meant to serve as an "alternative to the status quo in Vancouver".

The Courtyard House is located on a slender lot in Vancouver's Riley Park neighbourhood, which has many post-war bungalows. U-shaped in plan, the dwelling consists of boxy forms with roofs that gently slope down toward a central enclosed garden.

The home was designed for a couple with two children, one of whom has already left home. Rather than prioritizing the building's size, local firm Leckie Studio sought to reduce the home to its most vital elements– a philosophical approach it describes as essentialism.

"With its simple, compact form and focus on local materials, the project is grounded in a critical, regionalist approach that embodies an essentialist approach to architecture," the firm said.

"It is offered as an alternative to the status quo in Vancouver of single-family homes that seek to maximise the number of bedrooms and bathrooms on the site, under the misguided notion of resale value."

Encompassing 2,500 square feet (232 square metres), the two-storey home has a public area on the ground level and three bedrooms above.

On the ground floor, rooms are arranged around the landscaped courtyard, which is encircled on three sides by glazed walls. The fourth side was left open to the outdoors.

"The central, three-sided courtyard serves to introduce light and air into the centre of a relatively long and narrow floor plan, effectively introducing a third ‘middle yard' to the otherwise typical front and rear yards," the firm said. 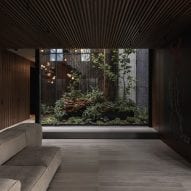 The front elevation, which faces north, features a recessed entryway, a slatted wooden screen and a large, square-shaped window. On the south, the upper portion of the home slightly cantilevers over the lower floor, helping shade a glazed wall.

Inside, the home has a clear layout, with a living room located in the front of the ground level, and a kitchen and dining area found in the rear. Situated between these two zones is the courtyard, which helps the dwelling feel more expansive.

"While the actual areas of the living room and kitchen/dining rooms that flank the courtyard are relatively modest, the perceived areas of each are effectively doubled as the fully glazed courtyard merges with each of those spaces," the team said.

A staircase lined with wooden slats leads up to the private areas on the second storey. The master suite faces the street, while the other bedrooms overlook the backyard. There also is an office space, which looks onto the courtyard.

While ample glazing is found on the lower floor, the upper level has less transparency.

"The second floor is characterised by discrete punched openings and strategically located skylights that reinforce an additional sense of privacy," the team said.

Founded by Michael Leckie in 2015, Leckie Studio has designed a number of residential projects, including a penthouse with a rainforest-style atrium that is found inside a BIG-designed tower in Vancouver. The firm also recently completed mirrored cabins that blend with the forest.