The pointed concrete structure, which is located in the Chung Dam District, is Herzog & de Meuron's first realised project in South Korea.

It is hoped to become a cultural landmark for the capital city and help with the international exposure of contemporary South Korean artists.

The ST SongEun Building is distinguished by its dramatic wedge-shaped form and textured concrete surfaces that feature both internally and externally.

According to the studio, its form responds to the scale of surrounding low-lying buildings, as well as a local zoning law that "allows for higher density towards the main street".

The external concrete walls are decorated with a checkerboard of wood grains, which was achieved by rotating the position of the wooden panels used in the formwork.

The decision to imprint the concrete with wood grains is a nod to the name of the building and organisation behind it, which translates as "hidden pine tree".

Inside, the 8,000-square-metre building contains 11 storeys above ground and five below.

The lowest levels contain a mix of exhibition spaces and art studios, while the upper storeys are used as the offices for an energy company called ST International.

Another leads to a ramp that descends into the underground parking area and cave-like exhibition spaces. 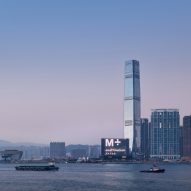 Coinciding with the building's opening is the inaugural exhibition programme. The first part of this is an exhibition called Herzog & de Meuron Exploring SongEun Art Space.

As its name suggests, the main focus of the exhibition is on the building itself, and it features documentation from Herzog & de Meuron's design and building process.

Alongside details about the building, there is also work by international artists that Herzog & de Meuron architects and the foundation have previously collaborated with.

The second part of the exhibition programme will be the 21st edition of the Songeun ArtAward – the foundation's annual prize to support young Korean artists – which will open in December.

Herzog & de Meuron was founded in 1978 by Jacques Herzog and Pierre de Meuron. The studio is no stranger to creating exhibition spaces, having also designed the M+ museum of visual culture in Hong Kong, the Tate Modern Switch House in London, the Perez Museum in Miami and the Parrish Art Museum in New York state.

It also recently completed the brick extension to MKM Museum Küppersmühle in Duisburg, Germany, which it originally created within a historic grain in 1999.

The photography is by Jihyun Jung unless stated. The video is by Kyoung Duk Joo, JDR Studio.