The M+ museum was designed by Swiss firm Herzog & de Meuron in collaboration with architecture studio Farrells and claims to be Asia's first global museum of contemporary visual culture.

Located on Hong Kong's Victoria Harbour waterfront, the building consists of two volumes – one long and flat and one tall and thin – which intersect to form an inverted T.

One side of the building is completely taken up by a 66-metre-high LED display screen showcasing M+ artworks, which is intended to present a creative retort to the city's commercial billboards. The museum's interior houses a research centre, offices, a members' room and restaurants.

Most of the M+ museum's public areas are located in the lower, three-storey horizontal section of the building, including gallery spaces, screening rooms and a learning hub.

The 65,000-square-metre building opened to the public on Friday, 12 November, with six exhibitions showcasing art, design and architecture from the region and beyond. Approximately 1,500 works from M+'s collection are displayed across 33 galleries and spaces.

Among the opening displays is Antony Gormley: Asian Field, the M+ collection's most monumental work. It consists of tens of thousands of clay figurines created by the British sculptor together with villagers from a Guandong village.

The figurines form a huddle looking out at visitors in the museum's West Gallery. This is the first time the work has been shown since its creation in 2003.

Another exhibition, The Dream of the Museum, in the entirely bamboo-clad Courtyard Galleries, explores the museum's conceptual approaches.

Special commissions for the opening include a calligraphic work by Tong Yang-Tze, displayed on the Main Hall's large structural columns, and installations by Chen Zhen and Danh Vo in the "Found Space", the museum's unique excavated area, formed by the concrete shelf covering two metro tunnels that run through the museum. 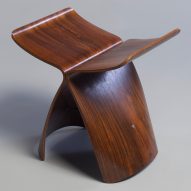 This space was "found" during building preparations and now "quite literally anchors the entire building in the ground", according to Herzog & de Meuron.

"Initially an obstacle that complicated planning, this distinctive feature has become the raison d'être for our project," the studio said. "By uncovering the tunnel, a spectacular space is created for art and design, installation and performance."

The M+ museum has made admission free to all visitors for 12 months. An opening programme featuring tours, workshops, sensory experiences, live performances, screenings and a digital component will run for the first three Fridays and weekends following the launch.

"Our vision for M+ is to build a community of learning that encourages empathy, respect, multiple perspectives and creativity through visual culture for all our audiences to benefit from," said M+ museum director Suhanya Raffel.

"By offering an open and welcoming platform with creative learning experiences, M+ is dedicated to creating an active culture that connects people, objects and spaces," she continued.

Construction on the M+ museum was completed in March of this year. It is one of 17 cultural venues being created as part of the West Kowloon Cultural District on Hong Kong's harbourside, which was masterplanned by Foster + Partners.

The M+ Pavilion, another exhibition space, opened in the cultural district in 2016.

Other recent cultural projects by Herzog & de Meuron include the ST SongEun Building, a wedge-shaped art institute in Seoul, and a brick extension to the MKM Museum Küppersmühle in Duisburg, Germany.

The photography is by Kevin Mak unless otherwise stated.