Italian studio Pedevilla Architects has used shingles made from trees that fell during a storm to cover the CiAsa Aqua Bad Cortina house in South Tyrol.

Surrounded by views of the Dolomite mountains, the dwelling is constructed almost entirely out of wood sourced from nearby forests and processed by local craftsmen.

CiAsa Aqua Bad Cortina was designed by Pedevilla Architects to have a minimal environmental impact and rely on local resources and know-how.

Among the locally-sourced woods used for the project are larch shingles that cover its roof and facade and spruce structural elements – all of which were crafted from trees that fell during Storm Vaja in October 2018.

The Alpine dwelling, which is shortlisted for the sustainable building of the year in Dezeen Awards 2021, takes its name from the Aqua Bad Cortina hotel estate in which it is located.

It was created as the home for the family who own the hotel during a wider expansion involving the construction of a thermal bathhouse.

According to Pedevilla Architects, the goal of ensuring the house is sensitive to the environment was to reflect the client's respect for nature.

"The client has a very spiritual appreciation towards nature," Pedevilla Architects told Dezeen. "For us, the challenge was to translate the associated aspiration into architecture and to treat nature, people and materials as respectfully and sustainably as possible."

The client's appreciation for the environment also led Pedevilla Architects to ensure the house has low energy consumption.

This has been achieved by using 36-centimetre-thick walls, which made insulation "completely unnecessary", Pedevilla Architects explained.

"It is also the first all-wooden house in South Tyrol without insulation that still meets the strict new construction standards of our time," claimed the studio.

The walls were constructed without adhesives and resins, ensuring their components can be recycled at the end of the building's useful life.

Externally, CiAsa Aqua Bad Cortina is distinguished by its distinctive trapezoidal form and a lack of distinction between its roof and facade through the shingle cladding.

This seamless finish was informed by the studio's "purist use of material" and goal of ensuring their buildings have sculptural and object-like forms. 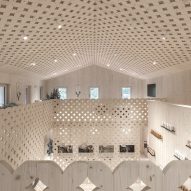 "The project is a consistent continuation of our architectural approach, considering its reduction and simplicity," the studio explained.

"This gives the buildings a down-to-earth feel and sculptural component."

The uniform exterior is broken up by large windows, two of which have trapezoidal shapes to complement the form of the house.

All of the windows are deliberately positioned to frame specific views of the mountains and their sizes are tailored to suit the purpose of the room in which they are positioned.

Inside, the dwelling comprises a kitchen and living room, alongside four bedrooms and three bathrooms. A fifth ensuite bedroom is contained in an attic space.

The interior design also echos the studio's pared-back design approach, lined with prefabricated pine wood walls and furniture. The pine was also salvaged after the storm.

Finishing touches to the interior include subtle trapezoidal motifs that echo the form of the house, such as on table legs and door handles, alongside stone flooring cut from boulders in the valley.

Pedevilla Architects was founded in 2005 in the city of Bruneck, Italy, by brothers Alexander and Armin Pedevilla. It is shortlisted for architecture studio of the year in the Dezeen Awards 2021.

Elsewhere the studio has completed a cookery school lined with perforated timber panels, a rose-hued fire station and an angular blackened-larch extension to a hotel.