The Tour Triangle skyscraper designed by Swiss studio Herzog & de Meuron is finally set to begin construction in Paris after 15 years in the making, amid a last-ditch attempt to stop it by the building's critics.

Developer Unibail-Rodamco-Westfield (URW) this month struck a partnership deal with an investment arm of French insurance multinational AXA, providing financial backing for the full €670 million cost of the project.

Initial building works on the 180-metre Tour Triangle are now expected to start by the end of the year and complete in 2026 – 12 years later than initially planned.

The Triangle would be the largest skyscraper to appear on central Paris' skyline since 1973. Planned for Avenue Ernest-Renan, the building will contain offices, a conference centre, shops, restaurants and a hotel.

Philippe Goujon, the mayor of the 15th arrondissement where the Triangle will stand, had vowed to appeal to the city council to postpone development, according to French newspaper Ouest-France.

Goujon has argued that the building is no longer relevant to the needs of businesses in the wake of the Covid-19 pandemic.

Meanwhile, Le Parisien revealed last month that France's National Financial Prosecutor's office has launched an investigation into allegations of favouritism on the part of the Paris mayor's office towards Viparis, the company which manages the Tour Triangle site and is a subsidiary of URW and the Paris Ile-de-France Chamber of Commerce and Industry.

The investigation could further delay the project, which URW had previously hoped would be ready in time for the 2024 Paris Olympics.

Architecture firm Herzog & de Meuron first started work on Tour Triangle in 2006 but – with proposals for tall buildings highly controversial in Paris – the project became heavily delayed by a series of lengthy planning and legal battles.

Set to stand at 42 storeys with 91,351 square metres of floor space, the Triangle would become the third-tallest building within the Paris city limits, behind only Tour Montparnasse and the Eiffel Tower. 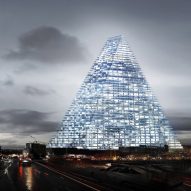 Its trapezoidal footprint means that from central Paris the Tour Triangle will look like a thin tower, but from the east and west, its full width will be visible.

Herzog & de Meuron said the shape, which has variously been compared to the Louvre pyramid, a chunk of Toblerone and a wedge of brie, is intended to maximise viewing angles for those inside while reducing the size of the shadow cast on neighbouring buildings.

"We designed Triangle for Paris and Parisians. What we want to achieve most with this building is that it should be open to everyone and include the entire community," studio founders Jacques Herzog and Pierre de Meuron said upon announcement of the URW-AXA funding deal.

Photovoltaic panels will be installed over the entire south-facing side of the Triangle.

URW has claimed the project "incorporates the highest environmental construction standards" as well as "best in class conventional energy consumption and a carbon emissions trajectory in line with the Paris climate agreement objectives".

The developer, which is Europe's largest property group, has also suggested the Triangle could change its uses in future if needed.

Established in 1978, Herzog & de Meuron has worked on numerous high-profile buildings, including the extension to the Tate Modern gallery in London and the Bird's Nest Olympic stadium in Beijing.

The images are provided courtesy of Herzog & de Meuron.