Ukrainian architecture practice Makhno Studio has designed a 3D-printed settlement for Mars named Plan C that would encircle the edge of a crater.

The concept was developed during coronavirus lockdown when the studio was questioning how underground living could be comfortable if life on Earth's ground level became difficult.

In response to this, Makhno Studio developed a proposal for an underground bunker that made headlines internationally. This  later led to Plan C, a concept for a Martian settlement.

The proposal sees a bagel-shaped settlement located on the inside of a crater, which would protect the development from Mars' environmental conditions – including frequent sandstorms, meteor showers and solar radiation.

The outer walls of Plan C would be constructed using large scale 3D-printers as the planet's oxygen levels would make it impossible for humans to build without spacesuits, oxygen devices and life support machines.

Its walls would protect the interior from the harsh atmospheric and weather conditions while also housing public halls, dining, research and technical areas as well as sleeping areas.

According to Makhno Studio, the interiors were informed by both Earth and Mars, with natural and earthy hues and rock-like surfaces and furnishings.

"The ambience of the interiors combines two worlds – the unknown Mars and the near-and-dear Earth," said Makhno Studio.

A large plant-filled public hall stretches the entirety of the ring-shaped structure and will connect to all of the settlement's different amenities.

Phyto-lighting, ultraviolet and infrared lighting that stimulates plant growth, will be fitted throughout the halls and will aid the plants in converting carbon dioxide and water into oxygen supplies.

The plant-filled public hall aims to replicate the conditions and feeling of Earth's green, open spaces, providing residents with fresh and clean air. 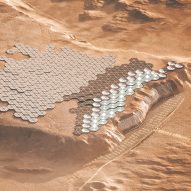 Vital spaces that aid the function of the settlement are located throughout the structure.

Spherical greenhouses fitted with Phyto-lamps were designed to resemble small planets and will be used for agricultural purposes, growing and supplying the settlement with fruits and vegetables.

Sleeping spaces are equipped with only the essential furnishings and are designed to host up to two people. A large screen covers the ceiling and can be used to watch films, cloudy landscapes and space imagery.

"Neon lighting allows one to tune in some discussion or turn on the mood of a Martian party – no one cancelled leisure time in space," explained the studio.

A gym and fitness facility will be built at the site in order to prevent residents from developing issues like muscle atrophy due to the low gravity conditions.

Exercise bikes and length pools will be organised along narrow stretches to help those adjust to the low-gravity conditions.

In a nearby room, floating capsules used for recovery and relaxation will provide residents with soothing and calming escapes.

"The capsule will help the new inhabitants of Mars to free their thoughts from sandstorms, reduce the cosmic impact on the body and mind, and finally adapt to the new conditions, a new home," said the studio.

Plan C is one of many designs that propose livable conditions for Mars, in 2017 Bjarke Ingels unveiled a concept for the Mars Science City near Dubai which would operate as a space simulation campus.

Architecture Abiboo envisioned a cliff-face city that would become the future capital of Mars and could eventually house 250,000 people.