Architecture studio Penoyre & Prasad has completed a huge Corten steel-clad research laboratory for UCL which will be used to simulate life-sized urban environments such as railway stations, high streets and town squares.

The Person-Environment-Activity Research Laboratory (PEARL) in east London was described by the director of the Centre for Transport Studies at University College London (UCL) as "a building to house the world".

Dubbed a "first-of-its-kind" by London-based Penoyre & Prasad, the facility is intended to test how different people use infrastructure and cities in order to improve urban design.

"When we first sat down with the client, he said, 'We're just looking for a building to house the world'. It was too exciting a challenge to pass up," Michael Fostiropoulos, an associate at Penoyre & Prasad who led the PEARL project, told Dezeen.

Inside, the lab is all-black with very low background sound and reverberation levels in an attempt to dispel the sensation of being in a building.

A series of gridded rigs made from theatre-style trusses are suspended from the ceiling, bearing specialist lighting, speakers, cameras and sensors in order to run experiments on the effects of different environmental conditions on people's behaviour and perception.

There is room for experiments involving up to 500 participants, plus 600 observers on seating that can be wheeled around the space.

"Ultimately this is a big, black box of tricks," Fostiropoulos added. "It's a sophisticated, technical building but it has a softer side to it as well; it is community-facing. UCL is interested in getting the community involved in the innovative experiments they're doing."

"The aim is for members of the public to drop in and talk with a researcher about the problems they face, for example, navigating the high street in their wheelchair, and then six months later perhaps participate in an experiment exploring new solutions to that problem," he said.

As well as the lab, the 4,000-square-metre building also includes flexible workshops and academic workspaces inside the "Groove", a free-standing, two-storey cross-laminated timber structure that houses the facility's public entrance and amenities.

On the outside, the structure's form and materials have an industrial feel in keeping with the Dagenham site. Scalloped rusted steel panelling along the west facade references the roof of a Grade II-listed neighbouring building and is intended to provide a softer, less daunting appearance.

Penoyre & Prasad worked with UCL professor Nick Tyler's team to devise the pattern on the steel facade based on the "natural, non-linear imagery" of people flow and crowd movement. This is a nod to the lab's areas of research and avoids a repetitive motif, which can be distressing for people with sensory or neurological conditions.

"The opposing requirements for the lab space to be supersized and completely black on the one hand and the need for people to relate to the building at a human scale on the other is where the design of the Groove and the Corten panels comes in," said Fostiropoulos. "We knew we had to build a big high-tech shed but we also knew we had this challenge of making it welcoming."

The triangular forecourt outside the building will host experiments using tube and train carriages, as well as a decommissioned aircraft fuselage due to arrive later this year, which will be connected to elevated openings in the facade via two jet bridges.

PEARL became the first finished building to achieve an Outstanding rating under updated BREEAM sustainability standards when it completed in March 2021.

It is projected to be UCL's first building to be net zero-carbon while in-use – meaning it does not produce operational emissions, without taking embodied carbon into account. 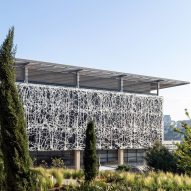 The building will achieve operational net-zero without the use of carbon offsets, a spokesperson for Penoyre & Prasad told Dezeen, thanks to its efficient fabric, air-source heat pumps and photovoltaic roof panels.

To reduce the embodied carbon impact, it has been designed for deconstruction and the circular economy, the practice added. The team maximised use of recycled and recyclable materials and off-site prefabrication to reduce construction-related waste, as well as reduced volumes of concrete for the foundations.

"We all have a responsibility to take action on climate change," said Tyler, director of UCL's Centre for Transport Studies.

"With PEARL we had a chance to make choices that could really make a difference, so the design of the building and its operations had to enable us to do all our research and education activities and to do this in a way that is beneficial to the environment," he added.

The facility forms part of the UK Collaboratorium for Research on Infrastructure and Cities, which is funded by the UK government's Engineering and Physical Sciences Research Council.

The photography is by Timothy Soar and James Tye.