An accessible rooftop and a tower clad in shingles will animate the luxury Fedje Hotel, which Saunders Architecture is designing for a small island and fishing village in Norway.

Set to be built on the west coast of Fedje, the hotel will offer a "quiet refuge" for tourists who want to experience living on island time.

Bergen-based studio Saunders Architecture's design also aims to provide visitors with an understated yet luxurious experience that it said will encapsulate the Nordic lifestyle.

"We want to create a quiet refuge," studio founder Todd Saunders told Dezeen. "We want the visitors to feel that this is a unique and special place."

"We want the feeling inside and out to reflect the simple ways Nordic countries experience their own version of luxury, one that is based on less noise, extremely good craftsmanship, yet a simple uncomplicated palette of materials, food, and experiences," Saunders added.

The project forms part of a wider masterplan that Saunders Architecture is developing with the owner of local whisky distillery Feddie Ocean Distillery, which will also involve the creation of two new villages.

It responds to the shrinking and ageing population of Fedje and is hoped to create more opportunities for tourism on the island to support the distillery and other emerging businesses.

The hotel will be positioned on the island's west coast, on a site chosen for being isolated yet within walking distance from the main town.

This spot will also provide the hotel with uninterrupted views of the Atlantic Ocean and allow visitors to experience dramatic changes in weather at the coastal site.

"We wanted a western site to see the sunset and a site where you could watch both the vicious North Atlantic storms as well as the calm, quiet beauty of this Nordic landscape on days that are sunny without wind," said Saunders.

"This site allowed us to take advantage of the various types of extreme weather conditions."

Saunders Architecture has designed a U-shaped form for the hotel, composed of three wings that fold around an internal courtyard.

This layout takes cues from the groupings of traditional farm buildings in Norway that are designed to create outdoor spaces sheltered from the wind.

The central arm of the U-shaped plan will be elevated above the ground, cantilevered from the adjoining wings. This is to allow visitors to walk under the building to a ground-level viewpoint looking out to the ocean.

One of the adjoining side wings will fold upwards to form a tower, while the opposite wing will slope downwards to create a ramp up to the hotel's roof.

The roof, which will be publicly accessible, is a nod to Allemannsretten – a law in Norway that grants every person the freedom to roam on uncultivated land.

"With this in mind, I wanted to create a building that did not take the land away from the people visiting the island and especially the locals living on Fedje," Saunders said.

"Most hotels privatise and take land," the architect added. "I wanted a building that gave."

The roof will be complete with large rocks designed to double as seats and spaces to grow local herbs that the chefs at the hotel can use in their cooking. 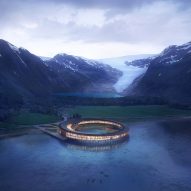 Fedje Hotel will be clad externally in a mix of locally sourced pinewood shingles and recycled slate, chosen to reference local vernacular architecture.

The pine will be left untreated to turn a silver-grey hue over time and the slate will be positioned on the more exposed north and east sides of the building.

Inside, Fedje Hotel's interior design is yet to be revealed but it will comprise up to 75 rooms. Each one will be designed so that its bed faces out towards the ocean.

The tower will contain public spaces including a bar, spa and restaurant on the uppermost levels.

"We want to create a special place that celebrates this nature and could be so good that one chooses it as a must-experience destination," Saunders said.

Saunders Architecture was founded by Canadian architect Saunders in Bergen in 1998. Elsewhere in Norway it has created a wedge-shaped cabin and its founder's own blackened timber home.

Many other projects by the studio, including a stilted hotel and a small twisted tower containing an artist's studio, can be found on Fogo Island in Canada.

The visuals are by Mir Visuals.