Envisioned by Brompton as a "factory of the future", the facility will sit within an unused wetlands area that will be rewilded to become a nature reserve as part of the plans.

Planned for 2027, the building will boast production facilities that are open to the public and dedicated bike access via a cycle ramp elevated above the wetlands.

The ambition is for the building to be carbon-neutral but also provide state-of-the-art facilities for Brompton to reach its target of producing 200,000 bikes per year.

Sustainability was the driving force behind Hollaway Studio's design.

The building is designed to optimise natural daylight and ventilation, harness wind and solar energy, and to draw heat from the ground through its foundation piles.

The architecture studio has also pledged to source materials responsibly, assess embodied carbon and ensure the site could be adapted for other uses in the future.

"The challenge in designing for Brompton this new sustainable factory located on a 100-acre wetland site was to rethink both the concept of a factory while creating a symbiotic relationship between industry and nature," said architect and founder Guy Holloway.

With a circular shape reminiscent of a wheel, the building will be raised up 2.2 metres above the ground to minimise its impact on the wetlands landscape and wildlife.

The building will include a Brompton Museum, events spaces and a rooftop canteen and terrace, as well as offices and production facilities for over 1,500 staff.

Brompton currently manufactures its pioneering folding bikes in Greenford, west London. The brand has promised to keep this facility open until at least 2030.

It is hoped the move to Ashford will allow the brand to maintain its connection to the capital, but also be within easy reach of Europe, thanks to the Eurostar railway link. 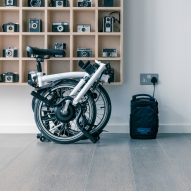 "As we face climate change, combined with poor mental and physical health in our cities, where most of the world population live, we need to adapt," said Will Butler-Adams, CEO of Brompton.

"There has been a global realisation post-pandemic that we need to change how we live in our cities, to design them around the people that live in them, not the automobile."

"Brompton has a large part to play in supporting that transition, but we need to have more space to innovate and create the products of the future," he continued.

"We have a long journey ahead with the planning and development of the new site, but we're thankful for the support of Ashford Borough Council, Hollaway Studio and Quinn Estates towards achieving our combined ambition to build this revolutionary and sustainable bicycle factory of the future."

Hollaway Studio – formerly known as Guy Holloway Architects – has offices in London and Kent, and has worked on numerous projects in England's southeast.

The studio designed the Rocksalt restaurant in Folkestone and a row of seafront homes in Margate, and is soon to unveil the world's first multi-storey skatepark in Folkestone.