Studios and designers including Olafur Eliasson and Pentagram are sharing illustrations to show support for Ukraine following the invasion by Russia. We've rounded up 10 of the most striking.

Designers around the world have taken to social media to show their support and to publicly condemn Russia's invasion of the country, which began on 24 February.

As well as creating illustrations, many are using their platforms to raise awareness and to provide information on how to help refugees or donate to various international and grassroots charities. 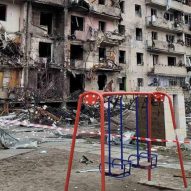 In response to the war, creatives from Lithuania launched Creatives for Ukraine, an open platform where designers, illustrators, and photographers all over the world can submit their work for free use.

"We are using our voice and written word while engaging our contacts to support peace," said Kristina Skindelytė-Galdkovienė, co-founder of Blue Oceans PR, one of three Lithuanian agencies that started the platform.

"We want the whole world to see and share art and images that convey frustration, hurt, helplessness and anger that creatives capture so adequately," she said.

Below are 10 artworks designed to show solidarity with Ukraine:

Alongside the post, the brand announced that it will donate funds to the United Nations' refugee agency United Nations High Commissioner for Refugees (UNHCR), in an effort to help people affected by the war.

Danish-Icelandic artist Olafur Eliasson, who is based in Berlin, shared details of organisations that are transporting donations to the border of Ukraine as well as groups that are arranging housing for refugees in the city.

The information was posted below an image created by Eliasson of a painting on a piece of wood in yellow, blue, black and white arranged in a formation that looks like a rising sun.

Furman is selling the artwork, as well as mugs and T-shirts, with proceeds set to go to the Disaster Emergency Committee's Ukraine humanitarian appeal.

Among the first international designers to post an illustration in solidarity with Ukraine, Jaime Hayon created a drawing of two birds embracing in his signature playful.

The artist has since shared other illustrations condemning the war including an optical illusion of a man wearing a face mask that can also be interpreted as a white bird of freedom.

French studio Ronan and Erwan Bouroullec co-founder of Ronan Bouroullec covered a blank canvas in blue and yellow colours to show his solidarity with the country.

A print for People of Print with the words "Russian warship, go fuck yourself" – a quote from a Ukrainian soldier at the beginning of the invasion – was Pentagram graphic designer Sascha Lobe's creative way of raising money for Ukrainian refugees.

The design was screen printed on paper, with all proceeds of the print sale going to UNHCR.

To show solidarity with Ukraine, colour company Pantone created an image featuring the colours from the country's flag labelled Freedom Blue and Energizing Yellow. It also posted a picture of a yellow sunflower against a blue sky.

The brand added a link to a list of organisations accepting relief donations to its Instagram bio.

Instead of raising money in a traditional fashion, Toronto-based digital artist Krista Kim encouraged users to donate to the official Ukrainian Ethereum wallet, a digital piggy bank for crypto donations for the country.

Kim is selling non-fungible token No. 700 v.26 on the NFT marketplace platform Super Rare to generate funds for the wallet.

Artist Oliver Jeffers provided examples of actions people can take, including switching to renewable energy instead of using oil-based energy which he believes plays a role in upholding Russian.

To accompany his message Jeffers created an illustration that asked the question: "Why are we back here?", referencing the history of past wars and conflicts.

Lithuania-based artist Karolis Strautniekas drew a portrait of Russian president Vladimir Putin, who he describes as "a blatant liar, manipulator and psychopath".

The image, which Strautniekas submitted to the Creatives for Ukraine platform, depicts Putin with a snake covering most of his face, alluding to the serpent's connotation with evil and death.