Architectural ideas can best be realised through imagery and movies rather than buildings, according to architect Liam Young, who is head judge of the Dezeen Awards media categories this year.

"I think the challenges that architecture faces today are sometimes best explored through the production of media," said Young.

"Media is so powerful in shaping who we are," he added, speaking to Dezeen from his studio in Los Angeles. "The onus is on us to create the right kinds of stories and to launch them with such force that they find traction."

Young will oversee the judging of the five media categories, which will reward photography, video, visualisations and websites across the industry.

"The scale of the audience of Dezeen is undeniable"

Now in their second year, the Dezeen Awards media categories will reward excellence in the way architecture, interiors and design are communicated and promoted. Media categories are just £40 during early entry period which closes 30 March. Prices will go up to £100 in the late entry period between 2 and 8 June.

"I think if we value the ideas and projects that we're producing it's our responsibility to find ways that we can best connect those projects to audiences and the scale of the audience of Dezeen is undeniable," explained Young.

"Dezeen Awards shouldn’t be seen as just a mechanism for advertising yourself but rather, it should be seen as a platform to connect people with ideas that you think are important."

Young is a Los Angeles-based speculative architect and director who uses visual arts, filmmaking and fiction to imagine new futures.

He is co-founder of Tomorrow's Thoughts Today, an urban futures think tank that explores the implications of new technologies, and Unknown Fields, a nomadic research studio that travels to chronicle these emerging conditions.

Regulation is "critical tool" for diversification

According to the BAFTA-nominated filmmaker, regulation is a critical tool when thinking about diversifying platforms.

"Unregulated media platforms has produced not a diversity of possibilities, but a very small network of monopolies," he said.

Young recently spoke about the opportunities and threats posed by the rise of the metaverse on a panel organised by Dezeen with speakers Refik Anadol and Space Popular as part of NeueHouse Hollywood's programming during the Frieze Los Angeles art fair. 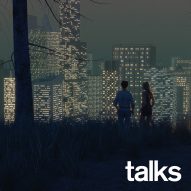 "Being responsible and mindful of the power of stories is important, making sure we're telling the right kinds of stories for today, stories that are relevant and critical and meaningful, not stories that are just designed to entertain or sell us things," said Young.

"If we understand that the act of making a building requires understanding the rules of materials, and the laws of physics and the conditions of a site, so too does media," described Young.

"It has rules that govern it, it has a material substrate that we work within, it has site conditions."

We now "measure time in apocalypses"

Young feels that we’re living in a dystopia with no time to reflect. "We're at a point where we now measure time in apocalypses," says Young. "Events that we once thought were once in a generation are now happening on a weekly or monthly basis."

"The power that media can play in mitigating and offering alternatives to these disastrous conditions that we find ourselves in is really important and cannot be underestimated," he added.

"Although the media landscape is owned by a small number of monopolies it's accessible and relatively easy to carve out a space within it."

Blockchain technology has the potential to create a substantial shift in systems of power, according to Young. This digital system is a type of shared database that stores information in blocks that are linked together in chronological order by cryptography.

"The potential of blockchain systems to create entirely new social structures and economic structures is without question," said Young.

For the first time this year, you can enter Non-Fungible Tokens (NFTs) for the Dezeen Awards 2022 visualisation of the year media category.

NFTs are cryptographic funds that exist on a blockchain system. These assets cannot be replicated and can depict objects such as artwork.

"If I were to see NFT inspired projects coming through the media submissions I would love that they're questioning the medium and trying to be reflective on the real potential for change," encouraged Young.

Young has held guest professorships at Princeton University, MIT, and Cambridge and now runs the masters in fiction and entertainment at SCI Arc in Los Angeles.

He has published several books including the recent Machine Landscapes: Architectures of the Post Anthropocene and Planet City, a story of a fictional city for the entire population of the earth.

For more details, visit our how to enter page. You can also subscribe to our newsletters to receive regular updates on Dezeen Awards 2022.