Historic structures including a silo building and an old factory have been incorporated into the University of the Arts Helsinki's new home, which was designed by local architecture studio JKMM.

The complex provides additional spaces for the university's Academy of Fine Arts and Theatre Academy, with a ground-floor gallery space open to the public.

Connected by a modernist silo building at their centre, the Theatre Academy occupies a soap factory. Meanwhile, the Academy of Fine Arts is housed in a new brick-clad building known as Mylly or The Mill in reference to a mill that also once stood on the site.

"With its raw surface and sense of spatial and experiential adventure, this is a building budding artists can respond to, challenge imaginatively and make their own," said the JKMM.

"The two academies interconnect through an existing modernist silo building at the heart of the site... the silo's strategically exposed concrete frame provides architectural vigour at this key juncture," it continued.

The new five-storey building for the Academy of Fine Arts centres around a large courtyard, cut through by a zig-zagging steel staircase that creates a "communal core".

This staircase connects studio and teaching spaces around the building's perimeter, and culminates in a rooftop terrace designed to be used as both work and exhibition space. 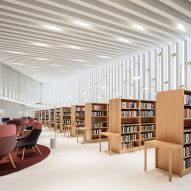 The ground-floor gallery features double-height windows to create a close connection to the street outside, and is defined by a series of large concrete columns.

Informed by the mill that once stood on the site, the exterior of the building is pared-back and finished in rough brickwork, with a series of deep-set windows in its facade and an arcaded space at its base.

A simple concrete frame of slabs and columns has been used to help facilitate future changes of use. Finishing materials were chosen to create a dialogue with the existing industrial buildings, contrasted by warmer wooden elements.

"For interiors and furniture design we selected materials that work well within an old industrial setting and can withstand substantial wear and tear," said lead interior architect Päivi Meuronen.

"We felt that the building should really embrace in an inspiring way the energy of student life and the process of art being made," she continued.

Helsinki-based JKMM has also recently renovated and extended a 1980s library in the Finnish town of Kirkkonummi, wrapping it in copper to contrast a nearby stone church.

The studio previously designed an extension to Finland's national museum in Helsinki that was topped with a white, disc-shaped concrete roof.

The photography is by Tuomas Uusheimo.