The exhibition about the Stockholm-based design studio, whose work includes the visual identity for the Nobel Prize and the redesigned Ericsson logo, focuses on how graphic design can become a ubiquitous part of the cityscape.

Stockholm Design Lab (SDL), which was founded in 1998, has worked with numerous commercial brands and the exhibition looks at how its designs have become a common sight in many Swedish towns.

Among the examples on display as part of the Smoothies, Museums and Airports exhibition is the studio's work for airport operator Swedavia, the identity it created for art gallery Moderna Muséet and the logo for Åhléns, a well-known department store.

Coming up with graphic design and company identities for big brands that you know need to be very visible has its challenges, according to the studio.

"All design is about having a clear strategy and goal, as well as a connection to the product or service you're designing for," said Stockholm Design Lab founder Björn Kusoffsky at the launch of the exhibition during Stockholm Design Week.

"But if you're designing something that you know will be on display in a very visible area, you have to think about the design a bit more," he told Dezeen.

"Sometimes it'll be driven by function, like our design for Arlanda Airport, while for Polestar, it's a more discreet design that pulls back a bit more – that's the two extremes. But often it's about making the design visible from a distance." 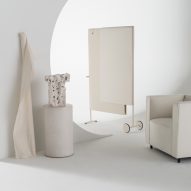 The studios' work for electric car brand Polestar is also on display in the exhibition, which is set in the Dehlin Brattgård Arkitekter-designed Boxen at ArkDes.

This includes Polestar's symbol and wordmark as well as its typography – some of which is even used on internal car parts not visible to the regular consumer.

In sharp contrast to the sometimes-hidden Polestar designs are SDL's packaging designs for IKEA food, which won gold at the advertising awards Cannes Design Lion Awards in 2012.

The packaging is likely to have been seen by millions of people visiting IKEA every year.

Though the exhibition focuses mainly on design that is on show in cities – on shop signs, adverts and store windows – the studio also works a lot with designing for the digital sphere, an aspect that has increased in the over two decades since its founding.

That means creating typefaces and wordmarks that work as well online as they do on printed ads.

But Kusoffsky says in a way graphic design has also come full circle, as digital technology is now sophisticated enough to allow for more design freedom, without having to adapt the graphics.

"Of course, you're designing for a digital environment and it has to work both functionally and visually, but the resolution on phones and computers is so good now that you could use an antique typeface," Kusoffsky explained.

"So [the design process] is actually more similar now to how it was twenty years ago."

Stockholm Design Lab is currently working on a number of upcoming projects, including continuing its work with launching Polestar globally and designing for Chinese smartphone manufacturer OPPO.

Other recent design exhibitions include one that highlights designer Bethany Williams' social-driven vision for the fashion industry and a Madrid Design Festival exhibition that aims to explore contemporary design.

The photography is by Louise Helmfrid.

Smoothies, Museums and Airports is on show at ArkDes until 1 May. See Dezeen Events Guide for an up-to-date list of architecture and design events taking place around the world.