French designer Philippe Starck has declared his solidarity with the Ukrainian people after Italian authorities seized Sailing Yacht A, a 145-metre sailboat he designed for a Russian billionaire, as part of international sanctions over the war in Ukraine.

Sailing Yacht A, one of the largest superyachts in the world, belongs to Russian oligarch Andrey Melnichenko, who is the owner of major fertiliser producer EuroChem Group and coal company SUEK.

The yacht, which was built by German shipyard Nobiskrug and designed by Starck, was seized by Italian authorities on 12 March, reported The Guardian.

Starck's studio said the designer's work "is not related" to events in Ukraine and underlined his support for its people following the Russian invasion of the country on 24 February.

"Philippe Starck and his work on A yachts 18 years ago are not related to the dramatic events going on in Ukraine and he, of course, wants to express his unreserved solidarity with the Ukrainian people and his unconditional support to their cause," Starck's studio told Dezeen. 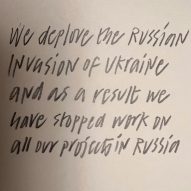 "We deplore the Russian invasion of Ukraine" says Norman Foster

Starck had previously described the 145-metre-long yacht, which launched in 2017, as "a floating sculpture coming from a mental space".

"Sailing Yacht A is the largest private sailing yacht in history: 145 meters long, 12 700 gross tonnage," Starck's Instagram said in a post from more than two years ago.

"The masts are 100 meters high with elevators inside. It has the natural elegance of its own intelligence."

The yacht is part of a fleet of boats designed by Starck for Melnichenko, which also includes a luxury motor yacht called Motor Yacht A, which has a design informed by the "movement of waves," as well as Limo, Yacht A's tender motor, and a smaller vessel.

Starck is perhaps best known for his furniture designs, which include designs for Cassina, but has worked on a wide range of projects, including interiors for a commercial space station and a power-dock for a hybrid car.

Sailing Yacht A is just one of numerous yachts seized by European authorities as part of the international sanctions put in place by the EU following the Russian invasion.

This has seen the bloc implement an asset freeze and travel restrictions against 877 people. The yacht’s owner, Melnichenko, "belongs to the most influential circle of Russian businesspeople with close connections to the Russian Government", the European Council stated.

"He is therefore involved in economic sectors providing a substantial source of revenue to the Government of the Russian Federation, which is responsible for the annexation of Crimea and the destabilisation of Ukraine," it added. 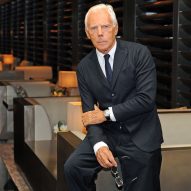 A number of other architects, designers and cultural institutions have also come out in support for Ukraine.

Studios including MVRDV, Norman Foster and Herzog & de Meuron, and David Chipperfield and Zaha Hadid Architects have suspended work on projects in Russia in protest of the invasion.

The photography is courtesy of Shutterstock.