Neri&Hu has completed a house in Singapore featuring living spaces arranged around a central garden that recalls the arrangement of traditional Chinese siheyuan buildings.

Shanghai-based studio Neri&Hu designed the property for three siblings who as adults had outgrown their shared house and wanted a new, larger property that recalls the distinctive pitched-roof form of their childhood home.

Neri&Hu based the house's design on traditional siheyuan residences, which typically accommodate multi-generational families in buildings surrounding a central courtyard.

"To live under the same roof means to live together," said the studio, "and this metaphor is the nexus that ties the notion of community, especially in an intimate context, to the form crafted for this project."

The building's shape references the previous house, which was built in the style of a British colonial bungalow and featured Victorian-style details combined with elements such as deep eaves borrowed from traditional Malay houses.

The prominent roof contains private areas including bedrooms on an additional upper floor, while from the outside the building retains the appearance of a single-storey hipped-roof bungalow.

"Understanding the functional importance of the roof and the client's emotional attachment to its form, we embraced the symbolic nature of the pitched roof and combined it with a reinterpretation of the courtyard house," the architects added.

Overhanging eaves extend beyond both the inner and outer facades, providing sheltered circulation spaces around the courtyard and the building's perimeter.

Near the house's entrance, the roof is punctured by a gable-shaped void that allows daylight to filter through the leaves of a tree planted on the paved terrace below.

The entrance passage extends through to the central courtyard, which contains a small garden dedicated to the siblings' late mother. This simple memorial gives the project its title, The House of Remembrance. 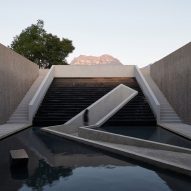 Large glass walls lining the living room, study, and an open-plan kitchen and dining area enhance the sense of connection between these communal spaces and the central garden, as well as providing views through to planted areas along the site's edges.

Sliding doors can be opened to allow the breeze to ventilate the rooms naturally while providing direct access to the gardens.

Bedrooms on the upper level are accommodated within the roof's steep gables. Large openings carved into the roof provide bedroom balconies overlooking the perimeter gardens.

Double-height voids create a visual connection between the two levels, allowing communal spaces, including the kitchen and living area, to be viewed from corridors on the upper floor.

Passages connecting the different spaces on the ground floor form a circle surrounding the courtyard. These curved corridors create a continuous procession that emphasises the sacred nature of the central memorial.

"Since the circle has no edges or terminating vantage points, it allows one to always find a return to the centre both spiritually and physically," Neri&Hu added.

Architects Lyndon Neri and Rossana Hu founded their interdisciplinary architecture and design office in 2004. The practice has worked on projects across all scales and in many countries, adopting a research-led approach that produces inventive, context-driven solutions.

The firm's previous projects include a stone-clad whisky distillery near Mount Emei in China's Sichuan province and a restaurant in Paris featuring a cylindrical tiled volume inserted within the existing aged stone walls.

Photography is by Fabian Ong.