The dwelling, called Pavilion House, comprises a main building and studio annexe alongside an existing barn.

Norm Architects took an approach of "tranquillity and simplicity" in its design, ensuring the home does not distract from its natural surroundings and complements existing structures on site.

"There is a certain humility within the architecture, acknowledging that the big-ticket item in the setting is indeed the countryside," the studio explained.

"The design of the house is all about transparency; nature becomes an integral part of the interior," Norm Architects continued. "It doesn't try to compete with it, but frames it instead."

The long, thin form of the Pavilion House sits on a podium made of dark basalt, which also doubles as a terrace around the building.

"A pavilion house of this length, surrounded by an imposing countryside, needs to stand proud and so we introduced a dark basalt podium as the foundation of the house," said the studio.

This podium is sheltered under the large overhang of the home's flat roof that features a dark steel fascia and a stone chimney.

Vertical planks of local larch wood clad the exterior, broken up by the large expanses of glazing in the living, dining and kitchen area and the bedroom block at the other end of the house.

Inside, the main living area is open in plan and organised around a central brick core that incorporates a wood-burning stove. This separates the lounge and dining spaces, minimising the need for internal doors and walls. 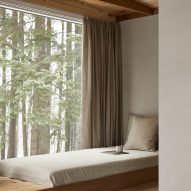 "Wherever you find yourself in the house, there's a seamless transition between its different functions," explained Norm Architects.

"Wherever you choose to look out, you'll find yourself fully immersed in the glorious surroundings; the architectural structure never spoils the stunning views," it continued.

Continuing the theme of simplicity, Norm Architects finished the interiors of Pavilion House with white walls, pale wooden floors, and furnishings in wood and earthy tones.

In the bathrooms, darker colours and finishes such as polished concrete have been chosen to help "create a sense of sanctuary".

In the annexe, which mirrors the appearance of the main home, there is a bedroom and bathroom, alongside a small sauna and spaces for laundry and storage.

The existing barn that previously dominated the site has been reduced in size and now houses a games room. This structure has also been fitted with solar panels and rainwater harvesting facilities to act as an "eco-workhorse" for the dwelling.

Norm Architects was founded in 2008 by Kasper Rønn Von Lotzbeck and Jonas Bjerre-Poulsen. It used a similarly pared-back approach in its recent design of a forest retreat in Sweden, which involved the conversion of a traditional timber cabin into a series of light, open living spaces.

Other projects by the studio include a minimal family getaway in Sweden called the Archipelago House and a black-timber Fjord Boat House near the border of Denmark and Germany.

The photography is by Jonas Bjerre-Poulsen.