Architecture firm Snøhetta has released plans for an expansion of the Hopkins Center for the Arts (the Hop) at Dartmouth in New Hampshire.

The expansion will include a new plaza for the area in front of the centre, as well as a new building and renovations to the existing structure.

The space is used for performances by artists from around the world, to hosts artist residencies, and supports student work. The Hop is the "front door to the campus as well as a vital place of gathering for visitors, staff, and students", according to Dartmouth.

A new lobby area, called the Forum, will sit between and connect the plaza and new facilities with the existing structure, which was designed by Wallace K Harrison — the architect behind the Metropolitan Opera in Manhattan.

With striated wooden walls and a long, curved staircase, the lobby area will connect the two floors of the new building with the preexisting 900-seat Spaulding Auditorium, which will be renovated under the current plans.

"We are excited to expand the Hop's pioneering legacy as a venue for emerging forms of artistic collaboration and creative expression by bringing new rehearsal and production spaces to the building, ensuring continued support for a variety of perspectives and ways of making," said Craig Dykers of Snøhetta.

A 150-seat, second-storey structure dubbed the Recital Hall will be the most significant addition.

Meant to resemble a "glass-enclosed lantern", the hall will feature tapered arch-framed windows with an "an innovative, curved mullion system" – intended to elaborate on the glass-in arches of the Harrison design.

Also in this building will be the Performance Lab.

The campus's first dedicated dance studio will also be part of the new build. The partially submerged space will have 24-foot-tall (7.3-metre) ceilings as well as clerestory windows that will look out into the plaza. 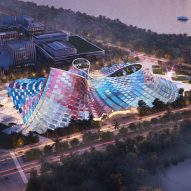 The distinctive barrel vaults of the original complex will be retained, with the focus on renovation happening mostly to the interiors.

First founded in Norway and now with offices worldwide, Snøhetta has undertaken a number of high-profile designs in the US. They include a research facility for Ford in Dearborn, as well as the Theodore Roosevelt Presidential Library in North Dakota, which is blended into the rolling hills of the high prairie.

The images are courtesey of Snøhetta and Methanoia.