MasFernandez Arquitectura has completed a wooden home in the outskirts of Santiago, Chile, for a client that is continually training for triathlon races.

The home is located in Chicureo, a Chilean town within the metropolitan region of Santiago. Its site enjoys easy access to a network of running and cycling trails that the owner uses for training.

MasFernandez also added a lap pool to the property, to allow the owners to train for swimming events as well. According to the architects, the owners are "high-performance athletes, that dedicate much of their time to practicing triathlon".

Located in the centre of a relatively large plot, the home itself is laid out as a three-point star, with no defined front or back facades.

MasFernandez Arquitectura explains that this layout maximises the number of windows within each room, allowing every bedroom to have direct access to the outdoors.

"The three-point star-shaped floor plan expands the perimeter and maximises the relationship with the exterior," said the studio based in Santiago.

"The pattern offers a clear distribution and an efficient use of the floor plan, in a house that effectively engages with its surroundings," they added.

The building is topped with a gently sloping roof, which defines an angular geometry where the three volumes intersect with one another.

The perimeter of the single-storey home is protected from the elements by this roof's overhang. The main entrance is towards the centre, where the three arms of the building converge.

This central space is the main living area and helps organise the three wings. The shortest contains the kitchen and dining room, and a laundry room with separate access to the exterior. 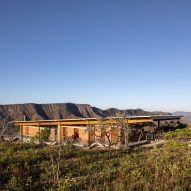 The other two legs are of roughly equal size. One contains the residents' bedrooms with a small home office, and the other has a guest suite and a home gym.

At the centre of the house, a skylight helps illuminate the main living area. "Each arm converges to the centre, where a triangular skylight arranges the common spaces into each direction," said MasFernandez Arquitectura.

The property was built using engineered wood, including glue-laminated structural beams and columns, and wooden walls. This palette extends to wall-coverings, doors and ceilings, lending a cohesive feeling to the interiors.

According to MasFernandez Arquitectura, wood was chosen for its sustainability and energy-efficiency characteristics. In certain areas, the architects designed a slatted pattern for the walls, which adds visual interest to the material.

Throughout the residence, a continuously concrete slab forms the interior and exterior floor finish.

Other residential projects in Chile include a block of row houses that was designed to appear as if it were one large residence, and a ski chalet that was built upon the foundations of a previous, unfinished project.

The photography is by Nico Saieh.