A bill has been filed in Washington DC calling for new buildings in the city to use bird-friendly glass, in an effort to minimise avian deaths resulting from window collisions.

Named The Migratory Local Wildlife Protection Act of 2022, the proposed legislation would require new buildings in the US capital to be designed with products that deter birds from colliding with their glass surfaces.

If approved, it would affect all new commercial, multi-unit residential, institutional, and government-owned buildings in the city. Existing buildings in these categories that are undergoing substantial renovations would also be impacted.

"Untreated glass – whether it be glass windows, doorways, or large building design elements – poses a significant and growing risk to birds and other migratory local wildlife," states the introduction to The Migratory Local Wildlife Protection Act of 2022.

"Glass collisions are the second leading man-made cause of death for birds," it continues. "Since 1970, North American bird populations have decreased by approximately 29 per cent, in part due to collisions with glass."

Studies suggest that as many as one billion birds are killed from bird-window collisions, as they are called, every year in the US alone. This is because birds can mistake the windows for continued space, or become disorientated by interior lighting that shines through them at night.

It is a problem in Washington DC primarily because the city sits along the Atlantic flyway – a major migratory route for birds in North America.

It was developed in coordination with experts at local organisation City Wildlife and the American Bird Conservancy. If approved, the legislation will come into effect from 1 January 2023.

Bird-friendly design can be low-cost

Among the bird-friendly products that the bill suggests should become mandatory are ultraviolet coatings, fritting or decals.

"These glass products are assessed by the American Bird Conservancy under their Bird Friendly Materials Evaluation Program and have been shown to be incredibly effective at reducing collisions," the bill states.

It also argues that incorporating these measures would add little extra cost to a project and even offer "secondary benefits" such as reduced solar glare and enhanced aesthetics. 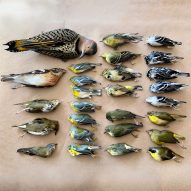 Since being proposed, the bill has been widely supported in the city, according to City Wildlife – a local organisation that has recorded an increasing number of bird collisions there since 2010.

The organisation's president Anna Lewis told Dezeen that the bill "will be highly effective" in solving the problem of bird collisions.

"The Migratory Local Wildlife Protection Act of 2022 will be highly effective in reducing these collisions and has strong support locally," Lewis said.

"We need to appreciate that these collisions are not random, that our building designs are causing them, and that there are simple fixes that can prevent these tragic collisions."

"DC lags behind" on bird-friendly legislation

If the bill is passed, the legislation would bring Washington DC's laws in line with many other places in the US, including San Francisco, Portland and the states of Illinois and Minnesota.

In New York, the city recently passed a bill that requires new glass buildings rising 23 metres (75 feet) or more to use patterned surfaces that are visible to birds.

"DC lags behind and needs to address its collision problem," reflected Lewis. "The new glass buildings in DC are having a large impact on migratory birds in our area."

Lewis added that the increase in bird-window collisions in the city is being directly caused by the continued construction of new glazed buildings, but also the trend of resheathing existing buildings in glass.

"In the small area that Lights Out DC monitors downtown…we found 212 birds in 2012, but with all the new glass buildings in that area, we are now finding 700 birds," Lewis added, referring to the volunteer programme the organisation holds in downtown Washington to collect dead or injured migratory birds that have collided with glass. 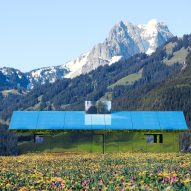 Despite a growing awareness of bird-window collisions around the world, glass facades continue to be a popular trend in architecture, with eight of the world's 10 tallest skyscrapers wrapped in glazing.

In a recent interview with Dezeen, ecologist Kaitlyn Parkins, who is campaigning to reduce bird deaths in New York City, said "we need broad-scale legislation requiring buildings to be bird-friendly".

Her thoughts were echoed by Dan Piselli, an architect at a studio called FXCollaborative that helped reduce bird strikes by 90 per cent at New York City's Jacob K Javits Center by making changes to the glazing.

Piselli said that the legislation in New York City has already had a positive effect as "it is causing glass manufacturers to take this issue much more seriously and to develop more solutions".

The need for bird-friendly building design hit the headlines last year when Melissa Breyer, a volunteer for New York City wildlife charity NYC Audobon, collected more than 200 dead birds that had flown into buildings at the World Trade Center in a single day.

The main photo is of SHoP's Midtown Center in Washington DC taken by Ty Cole Photography.