The vaulted forms and underground caves of an old house on the Greek island of Santorini have been converted into a holiday home complex by Kapsimalis Architects.

Located in the town of Fira, the components of the existing compound –  including walled courtyards, a donkey barn and three small caves for storage  – have been integrated into the new structures.

There are two separate entrances, leading out onto cobbled streets.

One of the new summer houses occupies the footprint of the original house, while the other sits within the converted caves.

To maintain the original feel of the home, the outer appearance of the structures, as well as their arrangement around two walled courtyards has been retained.

"The outer shell of both houses, bright and white, is preserved as it was, in a way that is integrated with its surroundings and the cubistic, traditional architecture of the village," said the studio.

Entry to the first home is via a wedge-shaped courtyard, partially covered by a mezzanine seating area above the entrance and a long, thin pool. 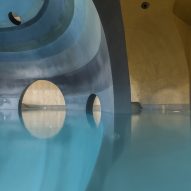 This courtyard forms a common space for two separate bedrooms, arranged around a living, kitchen and dining area.

The dining room is at the centre, beneath a high vaulted ceiling.

In the caves, the second holiday home has its own access via a second, rectangular courtyard. This  patio area includes space for sunbathing, a vaulted pool.

A staircase leads up to a terrace dining area with dramatic views of a nearby volcano.

Colour palettes and fittings were chosen to reflect the two distinct conditions in the former house and the caves, with furniture made by local craftsmen.

The rough, vaulted interiors of the caves have been smoothed out and finished with plaster in earthy tones, with minimalist light fittings and discreet built-in storage.

Doorways and niches in the cave all adopt an arch-like form, recalling the vaults of ceilings.

Kapsimalis Architects have completed several other holiday homes on the island of Santorini.

One also has a series of subterranean spaces, while a new-build was designed as a "contemporary translation" of the island's crisp white buildings.