American architect Robert Gurney used stucco, wood and brick on the facades of a rectilinear house near the US capital that was designed for a young professional.

The North Adams House is located in Arlington, Virginia, which lies directly across the Potomac River from Washington DC.

The home was designed for a single, young professional who desired a house that was small enough to require minimal upkeep yet large enough to accommodate more occupants in the future.

The rectangular dwelling sits on a corner lot in a suburban area with homes of varying styles that were built over the past century.

The 2,600-square-foot (242-square-metre) house is designed to respect the context, align with setback requirements, connect to the outdoors, and display a level of transparency that is unusual in the area.

"Most houses in the area are introverted with little relationship, visually or physically, to the immediate context," said architect Robert Gurney, who runs a Washington DC-based studio.

In addition to large stretches of glass, exterior walls are wrapped in stucco, brick and painted wooden clapboard – the same materials found on neighboring buildings.

On all sides, the house is surrounded by low-lying greenery, including grasses, ferns and flowering shrubs.

"Material transparency paired with a low garden bring a connection to suburban street life that the other houses on the street do not achieve," the team said.

The home has two levels and a basement. The public area occupies the ground floor while the more private areas are found up above. The basement holds storage space and mechanical equipment.

Throughout the home, Gurney took a restrained approach to finishes, both in terms of materials and colours. The client selected the furnishings. 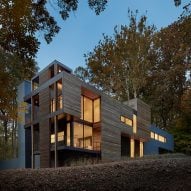 The ground level encompasses an open-concept area for cooking, dining and lounging, along with a garage. White oak flooring is paired with white and grey walls.

The kitchen is fitted with cabinetry made of grey-stained oak and lacquer, and countertops and a backsplash made of quartz. The dining set, from Rove Concepts, is a replica of furniture by Eero Saarinen.

The living room is adorned with a sectional by Giuseppe and Giuseppe, coffee tables by Hay and Pianca, and chairs from Blu Dot. Floor-to-ceiling glass provides views of the garden and neighborhood activity.

Upstairs, one finds the primary suite, two bedrooms, a second bathroom, a laundry room and a glass-walled office.

In the main suite, the architect incorporated a street-facing window system that provides both privacy and natural light.

The system consists of translucent panels from Kalwall made of fibreglass-reinforced plastic and set within an aluminium grid. There also is a row of operable windows, which usher in fresh air and provide a connection to the neighbourhood.

Other projects by Robert Gurney include an oceanfront dwelling in Delaware that was designed to meet strict building codes, and a family home in Maryland that consists of overlapping volumes clad in stone, wood, fibre cement and glass.

The photography is by Anice Hoachlander.