UK studio David Chipperfield Architects and Canadian studio Zeidler have won a competition to redevelop Block 2 on the Canadian Parliament precinct in Ottawa.

The studios have designed 11 buildings for the block directly facing parliament hill in downtown Ottawa, which will be used by the government as office space for members of parliament and to house the Library of Parliament.

The scheme by Zeidler and David Chipperfield Architects, which was chosen by an independent jury in a competition facilitated by the Royal Architecture Institute of Canada, will remain existing structures on the site and add "new low-carbon, efficient buildings".

"Through this project we have sought to develop an urban and architectural response that is both respectful and radical, embracing the past and looking to the future, motivated by concerns for the environment and the ideals of community," said David Chipperfield, principal of David Chipperfield Architects.

The plan loosely divides the block into east and west sections. On the east side, six buildings that contain offices will be connected by "communal spaces" with winter gardens.

While the five office buildings on the west side of the block will be connected by a garden atrium. On the far side of the development, retail will be included.

Zeilder and David Chipperfield Architects said that the plan will incorporate timber-framed buildings, have on-site generation of renewable energies, and include recycled elements from the existing structures including reclaimed copper.

Two of the buildings and a central plaza will be turned into an Indigenous Peoples' Space, dedicated to Canada's indigenous people.

"Stewardship of the land and resources is a concept embedded in Indigenous culture," said Zeidler and David Chipperfield Architects.

"It is also a tenet of good governance, sustainability and heritage conservation, and the basis for a design approach of minimal intervention and maximum retention for Block 2." 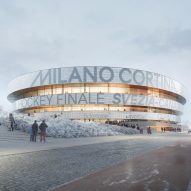 The government plans to begin construction on the project in the next 18-24 months.

"The redevelopment of Block 2 will transform this mix of aging buildings into modern, inclusive, sustainable, secure and accessible accommodations for the Parliament of Canada," said The Honourable Filomena Tassi, Minister of Public Services and Procurement.

"I truly hope that all Canadians will be able to visit and experience the chosen design, for years to come."

Other projects that use contemporary architecture to redefine parliamentary districts include Kéré Architecture's plans to model Benin's parliament on African palaver tree.

The images are courtesy of Prospettica.