Bangkok architecture studio All(zone) has been revealed as the next practice to design Melbourne's MPavilion, an annual architecture commission similar to London's Serpentine Pavilion.

The pavilion will be installed in the Queen Victoria Gardens in Melbourne in November and will be used as the venue for events, talks, workshops and performances.

According to the Naomi Milgrom Foundation, which funds the MPavilion, the studio was chosen for its focus on sustainability and commitment to using local materials to construct its projects.

Businesswoman and philanthropist Naomi Milgrom, founder of the foundation, said that the practice "demonstrates how architecture and design can contribute to creating sustainable cities".

"Rachaporn's architectural approach to 'the art of living lightly' and creating spaces with people and the environment at the heart of her practice demonstrates how architecture and design can contribute to creating sustainable, equitable cities," said Milgrom.

"With their commitment to designing built environments where people can feel at home in the world, All(zone) are known for their lively projects which reuse and recycle local materials in bold and innovative new ways." 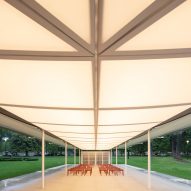 A different architect is selected to design the MPavilion every year. Pritzker Archietcture Prize-winning architect Murcutt constructed a minimal pavilion underneath a linear "lantern" roof in 2019.

As with previous MPavilions, Murcutt's has since been relocated to a permanent location in Melbourne.

All(zone)'s pavilion is scheduled to open to the public on 17 November 2022 and will be relocated to a permanent home in the city after the summer installation.

The first MPavilion was created in 2014 by another Australian architect, Melbourne-based Sean Godsell. Since then it has been designed by British architect Amanda Levete, Indian practice Studio Mumbai and Dutch studio OMA.