Researchers at MIT Media Lab have tested modular tiles that autonomously assemble to create habitats in space on the latest mission to the International Space Station.

Called Tesserae, the project aims to create future space habitats from reconfigurable tiles that assemble while in orbit around the moon or Earth.

MIT suggested the tiles can be used to form designs from "geodesic dome habitats, to microgravity concert halls, to space cathedrals."

The tiles are released from a spaceship and assemble in orbit. Rendering courtesy of TU Dortmund Fraunhofer Institute

Each 3D-printed tile is made of a rigid plastic outer shell with either five or six sides, with two indented holes for electromagnets.

These magnets allow the tiles to autonomously "snap" or bond together to form tesselated structures – polyhedral, enclosed shapes that resemble a honeycomb.

The bonding is designed to be both watertight and weathertight, making the structures suitable for future human habitation, and each tile also has a system for power harvesting and management.

"I hope to apply the Tesserae technology to build an entirely novel type of space architecture – large scale structures that can inspire awe and delight their occupants," said Ariel Ekblaw, director and founder of the Massachusetts Institute of Technology (MIT) space exploration initiative.

"We're about to enter a renaissance moment for space architecture where in-space structures can both protect humans and bring joy," she told Dezeen.

Ekblaw, who began developing the Tesserae technology during her PhD at MIT Media Lab, named the project Tesserae after the small, coloured tiles used in ancient Roman mosaics.

It is also an acronym for Tessellated Electromagnetic Space Structures for the Exploration of Reconfigurable, Adaptive Environments.

"We use bio-inspired processes like self-assembly and swarm robotics to explore a new paradigm for space architecture – building grand scale space structures in orbit," Ekblaw said.

While the biggest prototype tiles are only a few inches in diameter, the at-scale Tesserae tiles will have a five-foot-long edge so that when combined, they will be able to house people.

Unlike many current outer space structures, which are often rigid and made on Earth before being transported, the Tesserae tiles can be applied to many shapes and come flat-packed before being deployed in space.

They can also disassemble autonomously.

"The team behind Tesserae believes that their modular, self-assembly method can lower payload weight and reduce construction complexity, while also broadening the possibilities of what future space architecture may look like," explained Ekblaw.

"As habitation and operation needs evolve around new commercial space stations in low earth orbit and exploration missions to the Moon and Mars, space architecture must adapt to address new use-case and deployment contexts." 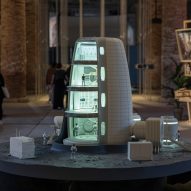 On 8 April 2022, Tesserae was one of 25 experiments on Axiom's private ten-day research mission to NASA's astronomical and research centre, the International Space Station (ISS). While here, astronauts released seven tiles into space and observed how they bonded together.

It was the first-ever private ISS mission and was flown in partnership with SpaceX, the spacecraft manufacturer founded by Elon Musk.

According to the mission's findings, the tiles successfully fused together and will be trialled next in 2023.

"We expect to deploy our next, iterative spaceflight test in 2023 and will continue to work with collaborators towards our long term vision for human habitability," explained Ekblaw.

Founded in 1985 and based at Massachusetts Institute of Technology in Cambridge, USA, MIT Media Lab researches topics including astrophysics, robotic technology and sustainable cities.