Dava Newman, former NASA deputy administrator, astronautics researcher and inventor of the BioSuit, will be the new director of MIT Media Lab.

Newman, who is currently the Apollo Program professor of astronautics in MIT’s department of aeronautics and astronautics, will take up the role on 1 July 2021.

"Leading the legendary Media Lab is a dream for me," said Newman.

"I can't wait to help write the next chapter of this uniquely creative, impactful, compassionate community."

Newman worked for NASA during the Obama administration and her research has focused on supporting the human body in space to help make interplanetary exploration a reality.

She is the designer of the BioSuit, a flexible skintight spacesuit for astronauts to wear on Mars.

Created in collaboration with NASA and MIT, the BioSuit was designed as a practical alternative to traditional rigid gas-filled pressure-controlled suits called extravehicular mobility units. 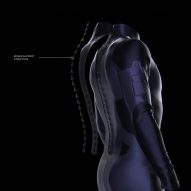 The stretchy skintight suit would be reinforced with an exoskeleton formed by a complex pattern of 3D lines. The goal of the BioSuit is to create something that could be put on by an astronaut in under ten minutes – saving precious time and money during expensive space flights.

Newman will bring this experience to MIT Media Lab, an interdisciplinary research organisation that brings together experts from a wide range of arts and science subjects.

"The magic of the Media Lab, which I hope to help build on, is to provide a trusted, open-minded, stimulating space where each person can contribute extraordinary expertise while being stretched beyond their comfort zone to collectively imagine a better, bolder future," she said.

Founded in 1985 and based at Massachusetts Institute of Technology in Cambridge, USA, MIT Media Lab researches topics including biotechnology, robotics and sustainable cities. Faculty members include Ekene Ijeoma, Hiroshi Ishii and Neri Oxman.

Images are courtesy of MIT.