The project – formally called The Nike Icon Studios LA – is the flagship studio space for the company's operations for global brand imaging.

Located near LA's border with Culver City, the building houses office space, meeting rooms and studios for video and photography. Formerly these functions were spread across multiple locations.

"Now everything is under one roof, enabling Nike to streamline their brand imaging operations," said local firm LOHA.

The architects were tasked with creating a flexible environment within an existing, concrete-and-steel building that totals 42,000 square feet (3,902 square metres).

"Influenced by the base building's linear geometry, the project is organized along a central spine that runs throughout, serving as the primary circulation," the architects said.

LOHA said it sought to create a workspace that met precise technical and performative requirements and embodied a pairing of art and science, much like Nike's products. Adaptability was also a guiding concern.

"Each of the production spaces is built to the ideal specifications set by the requirements of their operations, but also made to be modular, re-combinable and entirely flexible," the team said.

The ground level encompasses studios and support spaces for functions such as styling, loading and storage. The upper level – which reads as a mezzanine – holds offices, conference rooms and a post-production lab. Both floors have employee break areas.

Daylight flows in through skylights made of either glass or polycarbonate panels, some of which have operable bi-fold doors that provide light control.

The centre of the building contains the main entry and a "social core" spanning two levels. Upstairs, one finds a patio with wooden seating platforms, dining furniture and ping-pong tables.

For interior finishes, the team used purposeful materials and a colour palette mostly limited to white, black and grey.

Underfoot is concrete flooring sealed with wax and rubber-cork flooring. Walls are made of white gypsum board walls, with felt panelling or perforated metal panels used in certain areas.

Overhead, there are elements to control sound, such as fabric-wrapped panels, acoustic plaster and ceiling sound baffles.

To help light flow through the building, the team avoided solid surfaces where possible.

The main staircase is enclosed by walls made of a polypropylene industrial fabric that is draped over a steel frame. Upstairs, glazed surfaces have varying levels of opacity, depending upon the function of the room they border or enclose.

"This material layering provides a higher degree of light quality, allowing light to pass from the perimeter into the building in an intentional and controlled way," the team said. 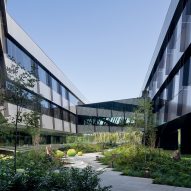 "Functioning like a camera itself, the studio is designed like a series of lenses that controls the light quality within."

The building also features a number of artist-created murals, many of which depict athletes associated with Nike and Los Angeles. Artists also created graphic wayfinding elements found in the facility.

LOHA emphasized that the building is meant to provide a physical place where people can come together – a particularly important consideration given the ongoing pandemic.

"The workplace is and will continue to be a rapidly changing organism," the team said. "Despite technological acceleration and work that is accessible anytime from anywhere, there remains a vital need for spaces that connect us physically."

Other office projects for Nike include two buildings on its main campus in Oregon – the Skylab-designed Serena Williams Building, which is clad in armour-like plates, and the Lebron James Innovation Center, designed by Olson Kundig and wrapped in steel mesh.

The photography is by Iwan Baan and Here And Now Agency.