Muted tones and a courtyard pool feature in this home by Mexican firm Rea Architectural Studio, who envisioned the project as a flexible space for the future inhabitants.

Casa Veronica is the fourth home Rea Architectural Studio has completed in Nuevo Vallarta, a development on Mexico's Pacific coastline just north of Puerto Vallarta, in the state of Nayarit.

Completed in 2021, Casa Veronica is the last of the almost-identical, conjoined habitations within the planned vacation community.

"[The] project [was] without defined users at the moment of designing, but with a clear objective: To improve the urban image of the immediate context, inviting the rest of the neighbours to make modest designs," said Rea Studio.

"This proposal acts as a blank canvas ready to be tailored," said the Guadalajara-based studio.

The 222-square-metre home is on a corner lot and has a mostly-white upper facade with an amber ground floor exterior on one side, complemented by rich-hued wooden slats.

In order to differentiate the homes in the development while still having uniformity the studio used a walled facade, local labour for construction and "a social area without programmatic boundaries adapting to the needs of the people who live there."

"We were interested in using a warmer colour scheme and a more enclosed volume than the rest of the houses, as an exercise to obtain a different impact on the other three adjoining ones," said Rea Architectural Studio.

At the centre of the home, a courtyard and pool open onto the dining area through large sliding glass doors. Rea Architectural Studio created a double-height space above the dining table, which helps make the room feel much larger. 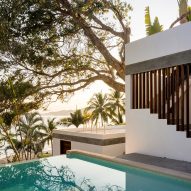 At the back of the home are the kitchen and living room, which have direct access to the backyard.

A flight of suspended steel stairs leads to the bedrooms upstairs. Rea Architectural Studio included three suites, each with its own bathroom.

Two of these are at the back of the property, and look out onto the garden. The primary bedroom, meanwhile, is at the front. This room opens onto a small balcony, which is partially enclosed by a perforated block wall.

This gridded feature is visible from the street and is one of the only openings seen from the front of the home.

On the roof, the architects included an outdoor kitchen and dining table, a seating area with couches, and a jacuzzi.

Rich wooden accents in the furniture and cabinets help offset the white-painted walls and ceilings. The floors are covered in white marble, giving the space an airy, open feeling.

"Casa Verónica is warmth, intimacy and coexistence, a timeless structure that seeks to be customized, a core of experiences hinged to a water feature diluting the boundaries between indoor and outdoor, " said Rea Architectural Studio.

"[It creates] well-defined domestic dynamic spaces, but agile to the changes that future owners may wish to apply," the studio added.

Other homes on the West coast of Mexico include a concrete surfer's refuge designed by Chris Luce and a home in San Ignacio that Estudio Palma reorganised around a central courtyard and pool.