Charles Holland Architects' Co-Living in the Countryside scheme was selected as the winner of the £10,000 prize, which called for projects to respond to the theme of Co-Living – A New Future? by reconsidering current housing models.

Co-Living in the Countryside is a model that proposes creating affordable, rentable co-housing in rural locations.

It is organised around the owner-adaptation and customisation of its homes under community-centred governance. Through its shared facilities, habitants can co-exist while sharing spaces, skills and resources. 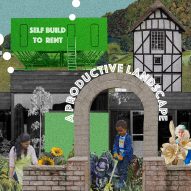 The proposal was developed alongside research charity Quality of Life Foundation with input from artist Keefe and Zeal-Henry.

"The winning team's proposal addressed a very real problem that is affordable rental housing in rural locations, and we enjoyed how the team combined owner-adaptation and customisation with a community-based governance model," said chair of the Davidson Prize jury Paul Monaghan.

"The judges felt that this proposal best responded to the judging criteria and could envisage it being rolled out around the country."

The Davidson Prize is an annual award that was launched in 2020 by the Alan Davidson Foundation. The prize explores different ways in which the home and housing can be altered through design.

It was launched following the death of its namesake, architectural visualisation pioneer Alan Davidson, who died in 2018 as a result of a motor neurone disease.

Last year, HomeForest was selected as the winner for the inaugural edition of the prize, which is an app that uses smart devices to bring nature into homes.