Kariouk Architects has completed MORE Cabin, a dramatic cantilevered structure overlooking a lake in Québec meant to stand out from its natural surroundings.

Its design for an angular, cantilevered cabin was completed in 2021, and is meant to stand out from conventional cottage design – or the typical "romanticized wilderness log cabin".

"These buildings sustain the myth that appearing to be one with the land equates to a reduced impact on the environment," the architecture studio added.

The 1,000 square-foot cabin is intended to appear contemporary, while also being more sustainably built and consuming fewer resources throughout its usable life.

Because of the steeply sloped site by the water, Kariouk Architects decided to create elevated living spaces.

While the entrance to the home is located at grade, most of the living areas sit atop a structural steel "mast", which the architects said reduces the environmental impact of foundation walls dug into the ground.

"Avoiding a conventional large foundation preserved the watershed and prevented erosion, as did elevating the construction zone," the studio said.

The team secured a zoning variance that allowed them to place the single structural support within the required setback from the water while cantilevering the resident's living spaces much closer to the lake.

"To this end, MORE Cabin touches the land lightly through interpreting the law creatively to uphold its principles," the studio explained.

The cabin has two bedrooms located along a corridor and separated by a bathroom.

At the end of the home is an open-concept kitchen, living and dining room, which has sweeping views of the surrounding treetops through its full-height window walls. 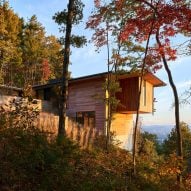 The cabin's structure was constructed from a combination of glue-laminated timber beams and prefabricated structural panels known as CLT.

Both of these technologies allow much of the home's fabrication to occur offsite, which reduces construction waste and guarantees a certain level of quality.

The interiors of the cabin were also finished with wood, lending the interiors a cozy atmosphere. In the colder months, the cabin is heated by a high-efficiency wood stove in the living room.

Other sustainable features that the architects used include solar panels, which generate enough electricity to cover the resident's usage and "bat pods" included in the steel mast that offer a nesting place for a local species of endangered brown bats.

MORE Cabin is an acronym made up of the names of the client's four grandmothers.

Other cottages in Canada include a large home built into a rocky hillside in British Columbia by Woven Architecture and Design, and a ski chalet by Montreal-based Naturehumaine that appears to have been split down the middle.

The photography is by Scott Norsworthy.