Juan Pablo Ureta has completed an beach house on Chile's northern coast, organising most of the living areas around an internal courtyard.

The house, constructed out of prefabricated wooden panels, is located near a small beach nicknamed Aguadulce, or Sweet Water, near the town of Huentelauquén, about 300 kilometres north of Santiago.

Chilean architect Juan Pablo Ureta created a separation between the main volume and the guest rooms so that the home could serve initially as a vacation house but someday house the clients full time.

A ramp brings visitors up to a partially enclosed deck that sits between the two halves of the home and provides access to both. "The access is defined by a ramp and a small patio, configured by an exposed concrete wall," said Ureta.

Rather than having interior corridors connect the various parts of the home, guests circulate via a series of walkways. Between the primary volume and the guest suite, a narrow opening leads to the central courtyard, which is the heart of the project.

"Both elements touch tangentially, but it is only possible to transit from one to the other through the terraces," the architect explained.

"This space is the core of the entire project and has different elements that help enhance the experience of inhabiting the outside," he added.

Besides these two volumes, which are laid out in an L-shape around the courtyard, the architects included a third, smaller structure that contains a home gym.

Some of the amenities in the courtyard include an outdoor kitchen, an oval fire pit and a swimming pool. The kitchen is contained within a concrete volume and is equipped with a barbecue, outdoor sink and plenty of storage.

"All the activities that can be carried out in a second home are subject to the patio, where you can sunbathe, enjoy the pool or share an incredible sunset with friends," said the architect.

The building's structure is made of laminated timber, including beams, columns and bearing walls. According to Ureta, the only concrete elements beside the foundation are the vertical slabs at the front and rear entrances.

Other structural elements are made from light-coloured pine. A palette of tropical woods complements this hue, including Raulí, which was used for the exterior cladding boards and Coigüe, a fast-growing species native to southern Chile and Patagonia.

"All the structural elements and the interior walls were prefabricated in a factory located 800 kilometres away from the site and transported by truck," said Ureta. 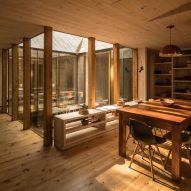 The open-concept kitchen, living and dining spaces are organised around a wood-burning stove. Fronting this space is a sliding glass wall, which creates a generous opening to the courtyard.

"The window facade that divides the social areas with the central patio is 9m long and can be completely opened, generating a single large environment in which the limits of each area seem to blur," the architect explained.

Although the home's interior and exterior spaces are all oriented to face the courtyard, the architects included a short flight of stairs to allow residences to go down to patch of land that faces towards the ocean.

"This generates a different experience, which is not linked to literally going to sit on the seashore, but nevertheless offers the possibility of enjoying the beach," said the architect.

Chile's long coastline facing the Pacific Ocean forms an ideal setting for beach houses. Other examples include a home that Chilean architect Cristián Boza built for his family in the 1990s that was recently photographed by Cristobal Palma, and a curvaceous coastal home by Gubbins Polidura Arquitectos and Más Arquitectos.

The photography is by Nico Saieh.