Subtle references to the experience of taking magic mushrooms are incorporated into the branding and packaging that Brooklyn studio Dark Igloo has designed for psilocybin dispensary PLANT.

The secretive shop is set in an undisclosed location and has no online presence, but was in need of distinctive packaging for its tinctures, capsules and chocolates containing psilocybin – the active compound found in hallucinogenic mushrooms.

This represents the studio's attempt at countering some of the negative connotations associated with psilocybin, which has shown promise as a treatment for mental health conditions such as depression in a growing number of studies.

"Our client believes in the importance of encountering PLANT safely in the real world, with the right guidance and information, rather than trying to reach a big audience online," Dark Igloo's art director Brooke Bamford told Dezeen.

"Our approach to the packaging was to lean into the shifting perception of psilocybin as a source of healing when used in the right amounts and under the right circumstances," she added.

"That meant packaging that feels trustworthy and contemporary, rather than overly psychedelic or silly. That said, we wanted to include notes of optical illusions, vibrant photography and other small touches that speak to the sensations one experiences on a journey."

References to mushrooms are largely subtle, found in the wavy stems of the letters L and N in PLANT's wordmark and in Dark Igloo's dreamy product photography, which nods to the sparkly visuals experienced by some users when taking psilocybin.

Elsewhere, the references are more overt as in the embossed chocolate bars and the individually wrapped, mushroom-shaped truffles. These also come in the shape of hearts and peace signs in reference to PLANT's name, which stands for Peace, Love and Naural Things.

Dark Igloo designed an intricate logo for the dispensary that is emblazoned on merchandise such as T-shirts and necklaces.

Informed by the particular strain of mushroom used by PLANT, which is known as Taj Mahal, the emblem is a double image resembling both an ornate portal and a path leading towards a sunrise. 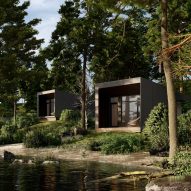 "As we refined the illustration, we discovered that with some small changes, the path to the sunrise could depict a mushroom as well," Bamford said.

"That was such an exciting concept for the logo to convey: mushrooms as a thing that grows from the ground, that can also serve as a path to healing traumas and emotional honesty."

Despite the fact that psilocybin remains illegal in the US under federal law, defined as a Schedule I substance with a "high potential for abuse" and "no legitimate medical purpose", studies are increasingly suggesting that the drug could help to treat depression by making patient's brain more flexible and capable of breaking negative thought patterns.

As a result, a number of US cities including Denver, Washington DC, Oakland and Seattle have effectively decriminalised the possession and use of the drug in recent years, while Oregon is set to become the first state to legalise supervised psilocybin therapy in 2023.

Although commercial sales of psilocybin remain illegal, a number of companies including Oakland-based Zide Door have started taking advantage of these loosening regulations in anticipation of a "psychedelic gold rush", which could see the industry valued at $10.75 billion come 2027.

This could see psychedelics follow in the footsteps of America's growing cannabis industry with its stylised dispensaries and smoking accessories, which together recorded an estimated $27 billion in sales last year.

However, some scientists and advocates have raised concerns about the rapid commercialisation of psychedelics, which they fear could hinder research and drive up prices, ultimately making them less accessible.