Massive lamps, rotating mirrors and a legion of drawers feature inside the Morela eyewear store, which Slovenian designer Nika Zupanc has completed in Ljubljana.

Morela has been offering optician services in the Slovenian capital since the early 2000s and went on to launch its own line of glasses in 2019.

Locally based Zupanc was brought in to design both the brand's debut eyewear collection and now the retail space to match.

Set in Ljubljana's Citypark shopping centre, the store is defined by the slim powder-blue drawers with brass knobs, which appear everywhere from the cash desk to the base of the freestanding counters and low-lying sideboards.

"Thus a drawer became a unit of measurement and served as a building block, from which the entire interior was created."

The abundant storage is also a nod to one of Zupanc's earlier designs – a 140-drawer cylindrical cabinet she created for Milan's Rossana Orlandi Gallery in 2017.

Eyewear models are displayed along the sides of the room inside brass-framed shelves that mirror the proportions of the drawers.

To enhance the "Alice in Wonderland ambience" of the space, Zupanc introduced two huge floor lamps with pleated white shades, both handmade in Italy.

One towers above the cash desk while the other pokes out through a blush-coloured velvet pouf to provide both lighting and seating. Alternatively, customers can sit on velvet-upholstered high chairs that are dotted across the room. 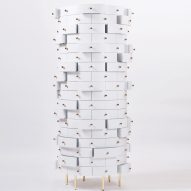 Nika Zupanc designs a tower of drawers for storing keepsakes

Mirrors are suspended from a thin brass picture rail that runs along the perimeter of the room. Each is housed in a circular brass frame and can be rotated to reflect different angles of the room.

The rail also holds heavy powder-blue curtains that separate the main shop floor from a treatment area and repair room at the rear of the plan.

Other striking eyewear stores include Vision Studio in Melbourne, which hides behind a perforated aluminium facade, and the Cubitts shop in London's Soho, which nods to the sex shops and adult cinemas found in the notorious neighbourhood.

The photography is by Saša Hess.