Gabled elements and corrugated aluminium siding feature in a family home that was designed by Canadian firm StudioAC to be "impactful without being indulgent”.

The Everden house is located on a slender, rectangular lot in Toronto's Cedarvale neighbourhood.

"The brief was to create a home that felt unique and personal to the homeowners and unapologetically contemporary, while still having cues to the traditional ideas of ‘house',” said local firm StudioAC.

Aiming to create a residence that feels both "playful and serious”, the architects designed a three-storey building that reads as stacked boxes.

The home is topped with a gabled roof that alludes to the local housing stock. The peaked form was used for certain windows and interior elements, as well.

"While a gabled roof is one of the quintessential icons of ‘house', we were interested in elevating this phenomenon beyond motif to a spatial experience that defined a narrative throughout the project,” the architecture studio said.

Facades are clad in corrugated aluminium, which was selected for its durability and affordability.

On the front elevation, upper windows are covered with a mesh made from aluminium panels, which were custom perforated and then sealed.

Inside, the team put special focus on the spatial experience, which freed them up to be flexible with the material expression.

"This approach was integral to working with the clients' budget strategy and thesis – create a project that is impactful without being indulgent,” the team said.

The ground floor is split level, with the dining area and kitchen occupying the front portion of the plan and a sunken living room situated in the rear.

Steps lead down from the kitchen to the living area, which provides a physical separation without the use of a wall, the architecture studio said.

"We wanted to create spatial delineation and the feeling of threshold – division and nuance of experience from one space to the next,” StudioAC said.

"The living room feels as though it has a higher ceiling and is a bit of a grand space while maintaining a continuous ceiling line from the front of the house to the back,” it added. 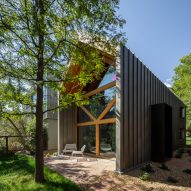 The top floor has a gabled ceiling that follows the roof's contours. A gabled ceiling is also found on the ground level, where one might typically find a cubic space.

"The interior focuses on one critical move: the peaked ceiling scape,” the team said. "This allowed other details to become secondary and in doing so, cost-effective.”

Rooms feature a restrained palette of materials, including white oak for flooring and ceilings and Caesarstone quartz for kitchen countertops. White-painted millwork was used to form tall cabinets and closets.

In several areas, rooms are illuminated by long, LED strips that run along the ceiling.

StudioAC said the project was in line with its usual focus on creating spatial conditions that are atypical and "allow program to define volume".

"The project seeks to straddle the fine line between academic and explorative architecture while still being livable, usable and timeless,” the team said.

Other projects by StudioAC include a Toronto dwelling with elements that take cues from work by artist Donald Judd and a high-end cannabis dispensary that features zigzagging partitions made of industrial grating.