2100 N Southport Avenue will be a nine-storey residential tower project led by developers Sterling Bay. If completed, it will mark the city's "tallest timber-made building to be constructed since before the Great Chicago Fire of 1871," the developers said.

The structure will have glue-laminated beams and columns and cross-laminated floor assemblies with a reinforced-concrete parking enclosure and a stair core.

"The building was designed from the inside out and organized around the column grid with optimized bays that minimize waste and maximize efficiency in prefabricated mass-timber material," said HPA.

The facades will be clad in aluminium window wall which will "keep the building envelope lightweight and provide outside views of the exposed mass timber columns, beams and decks" the studio continued.

Ornamental steel feel fasteners and plates will be included in the lobby and first floor.

Construction to begin next year

Construction is expected to start in 2023 after the project team gained approval from the Chicago Building department in May 2022 by "demonstrating that the hybrid structural system could meet the rigorous hourly fire-resistance ratings required".

However, the project still needs to secure zoning changes and final approval from the council, reported the Chicago Tribune.

According to the studio, there are numerous advantages with mass-timber buildings.

"Construction timelines are faster and, most importantly, mass timber performs well in the event of a fire," said HPA principal Ray Hartshorne. 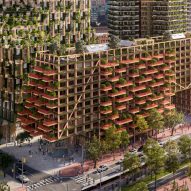 Sterling Bay noted that wood construction has been viewed with some scepticism since the Great Chicago Fire devasted the city in the late 19th century, destroying more than 17,000 buildings.

"While timber was seen as an unsafe and unstable building material after the fire, recent advancements in adhesives that allow for the creation of mass-timber, a fire-resistant laminated timber alternative, have inspired architects, builders, and sustainability advocates around the world to revisit timber construction for its natural beauty, durability, and reduced carbon emissions," the developer said.

Project latest mass-timber structure to be announced in North America

Mass-timber structures – those built from wood adhered together to create fire-resistant and load-bearing beams on par with steel – are gaining ground in many American cities.

HPA has previously led a number of mass-timber projects around the country, including a nine-storey residential program in Cleveland.

Other recently announced mass-timber projects in North America include Icon Architecture's plan to build a 90-metre-tall residential tower in Ontario.