A photovoltaic array and a lattice made of salvaged wood are among the sustainable features of Congregation Kol Emeth, a Palo Alto synagogue designed by local studio Field Architecture.

The synagogue complex is located on a triangular site bordered by houses, a highway and a cemetery.

Established in the 1960s, the congregation had outgrown its original building and commissioned Palo Alto's Field Architecture to rethink its property.

"The synagogue commissioned us to transform its property into an ever-evolving spiritual refuge that would embrace ecological responsibility and foster its community's spiritual practice in everyday life," the team said.

The architects conceived a series of single-storey buildings – framed with timber and steel – that are interspersed with courtyards and gardens. Larger volumes are clad in stucco.

Together, the structures form an L-shaped plan and total about 17,850 square feet (1,658 square metres).

One volume holds the main sanctuary and is flanked by a children's area, a library and restrooms. Another contains a social hall, a kitchen, a classroom and a lounge. A third building encompasses offices, classrooms and a small sanctuary.

There also is an underground parking garage that measures 41,500 square feet (3,855 square metres).

A rooftop photovoltaic array generates all of the needed power for the campus, which the architecture studio said has achieved net-zero-energy, and collected rainwater is used for irrigation.

The project is the first synagogue to earn LEED Platinum certification from the US Green Building Council, the team said.

Several elements were used to visually unite the buildings.

On the west-facing perimeter of the complex, where a single front connects the main sanctuary and social hall building, the team created a timber lattice in front of the ample glazing.

Each piece of salvaged wood was carefully mounted to the structure's steel frame to produce specific lighting conditions inside.

Another connective element is an undulating canopy found in the sanctuary and an adjoining courtyard.

The canopy – made of birch plywood – has symbolic meaning, as it refers to the traditional canopy structure – a chuppah – that a bride and groom stand under during Jewish weddings.

Throughout the complex, the team used earthy materials such as wood and stone. The sanctuary features travertine ark stones with a curtain hung between them, as well as oak flooring and seating.

To provide daylighting and a link to the outdoors, the team incorporated "simple but impactful" elements such as skylights, clerestories and sliding glass walls. 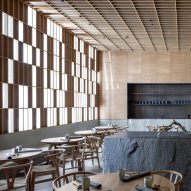 "The airy, welcoming spaces easily flow between indoors and outdoors, connecting congregants both physically and visually to the natural world," the team said.

Landscaping was a significant factor in the design. Along the front facade, the team incorporated a "living habitat" with native plants.

During times of low rainfall, gardens are irrigated with rainwater that was previously collected and stored on-site.

Other synagogues include a building in Ulm, Germany, by Kister Scheithauer Gross that features limestone walls and patterned windows, and a pop-up synagogue in Ukraine by Manuel Herz Architects that was built to mark the 80th anniversary of a massacre that occurred during the Holocaust.