An art installation featuring a waterfall, a wild garden and a number of kinetic artworks has opened on a former North Sea offshore gas platform in Weston-super-Mare, England, as part of the Unboxed festival.

Created for the Unboxed festival, which has been dubbed the Brexit festival, the four-storey See Monster is one of the UK's largest public art installations.

Designed by creative studio Newsubstance, the 450-tonne platform offshore gas platform sits in a shallow pool on the Weston-super-Mare seafront. A 10-metre-high waterfall cascades from the platform's lowest level.

The art installation also features a multi-level slide, a broadcast studio and a seated amphitheatre, while the gas platform's former helideck now functions as a viewpoint.

According to Unboxed: Creativity in the UK's chief creative officer, Martin Green, the installation aims to showcase how industrial structures can be reused.

"The transformation of a decommissioned platform into one of the UK's most ambitious public art installations has been an unprecedented undertaking and offers a blueprint for the reuse of industrial structures that everyone involved should be proud of," Green said.

The artworks on the platform draw attention to the British weather and were designed to look at the science behind weather, as well as how it can be used to help build a more sustainable future.

Among them are kinetic sculptor Ivan Black's sun and moon sculptures, designed to rotate in the wind. Black, who described them as being "as much works of engineering as art" made the sculptures from aluminium so that they would withstand the corrosive salt in the sea air. 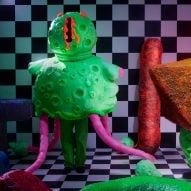 The artwork was made with renewable-energy team Land Art Generator and will be used to power the irrigation systems of the platform's garden, called The Garden Lab.

The See Monster also features another kinetic installation – 6,000 shimmering "scales" that were designed to move in the wind and decorate the exterior of the former gas platform.

"We are incredibly excited to be the first people in the world to reuse a structure in this way, with its potential to provide a blueprint for future global reuse projects," Newsubstance founder and creative director Patrick O'Mahoney said of the project.

"From the roar of the waterfall to the shimmering scales, we invite our audience to ascend the monster, running through clouds and exploring wild gardens until they reach the summit where they can see our monster's home from a new perspective," he added.

See Monster was created as part of the government-funded Unboxed: Creativity in the UK festival. Pitched as a "festival of creativity," Unboxed became known as the Festival of Brexit, as it was conceived while the UK government was negotiating its withdrawal from the European Union.

The UK left the EU in 2020. The festival, which is currently ongoing, also features Dreamachine, an immersive installation by architecture studio Assemble. French designer Nelly Ben Hayoun also created Tour de Moon, a touring festival that aims to champion nightlife, as part of the festival.

The photography is by Ben Birchall.

See Monster is on show at Marina Parade, Weston-super-Mare, from 24 September to 5 November 2022. See Dezeen Events Guide for an up-to-date list of architecture and design events taking place around the world.