Architecture studio Chybik + Kristof has completed the angular Modular Research Centre in the Czech Republic, which is constructed from aluminium and aims to reframe ideas behind prefabricated construction.

Located in Vizovice, the building sits on the edge of the headquarters of Koma Modular, a modular construction specialist with which it developed the project.

The Modular Research Centre forms an innovation hub and gathering space for Koma Modular while also doubling as a prototype for an adaptable prefabricated building.

It is situated on a triangular plot and comprises three main elements – a floor, room-like containers and a roof unit. These fix together to create angular forms, opposing the typical rectilinear shapes associated with modular architecture.

"Modular architecture requires significant design complexity, which challenged and motivated us to depart from standard rectangular construction for this particular project," added the studio.

"While modular structures are usually created by placing right-angled modules side by side, we realise new spatial possibilities through the creation of an advanced modular system."

Chybik + Kristof organised six room-like containers across the plot on a floor module that is anchored to the ground. Roof units, both flat and cone-like, are fixed to the top of each and span open spaces between them.

The Modular Research Centre benefits from a column-free interior as a result of the container units functioning like columns and load-bearing walls, directing loads to the ground via the floor module. 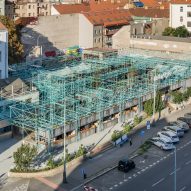 Along the perimeter of the structure and between the meeting points of the containers, roof modules, and floor unit, large floor-to-ceiling windows are fitted to draw light to the interior. They also help to visually connect the workspaces to the outside.

According to Chybik + Kristof, the modules can be easily relocated, recused, or recycled.

Aluminium was used as a primary material for the project as it is manufactured on-site by Koma Modular.

The company's own perforated aluminium is used as cladding on all surfaces where there is no glass, covering exterior and interior walls and ceilings. The metallic surfaces of the interior allow light to bounce and reflect throughout the space.

"Being the materials that Koma manufactures and uses daily, both modules and aluminium were the obvious choices," said Chybik + Kristof.

"The selected materials emphasise and aid the understanding of modular build principles easily, with their perforated surface and visible details used to the maximum extent in their natural form."

According to the studio, using locally produced materials was also an effort to lower the project's carbon footprint.

"Due to its proximity to the Koma factory, the Modular Research Centre significantly mitigates the carbon footprint of the building, as no transportation is required," said Chybik + Kristof.

Workspaces and seating areas are placed around the edges of the building, while a path at the centre directs visitors through the structure. Curtains and curtain tracks were fitted to the perforated aluminium ceiling to informally divide and zone workspaces, providing its users and employees with privacy.

Chybik + Kristof and Koma Modular have long collaborated projects involving modular architecture. At Milan Expo 2015, they developed the Czech Pavilion, which was designed to be easily disassembled into multiple modules for transportation. This structure now exists at the same site as the Modular Research Centre, being used as an administrative building for Koma.

In Prague, Chybik + Kristof recently completed a pop-up marketplace that featured a modular structure of pastel-blue scaffolding that can be modified or relocated.

The photography is by Jesús Granada unless stated otherwise.