Architecture studio Populous and local studio Hastings have completed Geodis Park in Nashville for Nashville SC, which the studios say is the largest stadium dedicated to soccer ever built in USA.

The open-air, 30,000-seat venue is located at the Nashville Fairgrounds with Populous designing the pitch and "fan experience" and Nashville-based Hastings responsible for the core and shell of the building.

According to the studios, Geodis Park, which is now home to Nashville SC, is the "largest purpose-built" stadium for soccer to be completed in the United States.

It is made up of a rectangular structure made with exposed steel beams that reference the "creative and industrial history of Music City," according to the studios.

Populous and Hasting said that the juxtaposition between the steel beams of the superstructure and the bricks of the base mirrors the mix of industrial and residential buildings that characterise Nashville.

"The Nashville identity is seamlessly and authentically woven into the design and the fabric of this stadium through our collaboration with Hastings, which pairs innovation and high design to energize and serve Nashville SC, its fans and the city,” said Populous senior principal Bruce Miller.

A large canopy shelters the seating in the open-air stadium and the concourse that surrounds the stadium has a ceiling clad in bamboo.

"The modern design is complemented by warm materials and factory-inspired wayfinding that lend a comfortable 'lived-in' sensibility to the park and the individual spaces," said Populous and Hastings.

"Bespoke" and tone-down graphics have been implemented throughout the site, including lettering that spells out the lyrics of the Nashville SC fight song on the bamboo ceilings.

Large banners can be hung from the gridded steel structure that makes up the exterior.

Inside the bowl, the studios included a standing supporter's section that was steeply angled in order to give fans closer views to the pitch – this section is supported by a separate entrance for the most "rowdy" fans.

A series of boxed seating have different themes from "music-centric" to a luxury club experience.

A large exterior plaza was included in the design with a video board for performances or pre-game entertainment.

According to the studios, specific attention was given to the plaza to revitalize the Fairgrounds and to connect Nashville's downtown with the adjacent universities and the "strong international community to the southeast".

"The stadium acts as a catalyst for development and community interaction, upholding and revitalizing the Fairgrounds legacy of community gathering," they said. 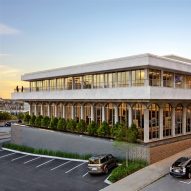 Hastings Architecture converts 1960s Nashville library into its own headquarters

Because of the prominent music scene in Nashville, considerations were also made to have the stadium double as a concert arena, when necessary.

Populous focuses primarily on stadium design and was responsible for the Ice Ribbon arena at the 2022 Beijing Winter Olympics.

The studio also recently announced plans for an "intimate yet intimating" design for the NFL team the Buffalo Bills' stadium in New York.

Internationally, designs for the upcoming 2022 World Cup stadiums have reached completion. These include UK architecture studio Foster + Partner's design for the finals in Qatar.

The photography is by Tom Harris.