The stone walls of a 16th-century clergy house have been restored and contrasted with new, white concrete elements to create El Priorato, a holiday home in Burgos, Spain, designed by local practice Atienza Maure Arquitectos.

The project has both restored and extended the original building, which had recently burnt down leaving only its stone arches and walls intact.

Using a simple palette of materials and forms that are contemporary but sensitive to the building's heritage, Madrid and Barcelona-based Atienza Maure Arquitectos created an eight-bedroom holiday home called El Priorato, or The Priory.

"Unfortunately no one seems to have photos of the interiors before the structure collapsed, so we had to gather the information almost like at an archaeological site," Atienza Maure Arquitectos co-founder Alonso Atienza told Dezeen.

"The dichotomy between old and new is solved with an ambiguity and subtle differentiation in the use of materials and the spaces," he continued.

Due to the building's steeply sloping site, the ground floor was formerly a darker basement level used for storage, which informed the practice's approach of introducing as much natural light as possible.

As the existing walls were heritage-protected, five skylights were created in the new timber roof, above triangular light wells and walk-on glass floors that draw light deep into the building's three storeys.

"Everything revolves around the attempt to introduce light into the rooms and on the ground floor, as in John Soane's house museum or in the Rascainfiernos of Fernando Higueras," said Atienza. 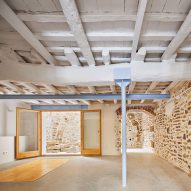 Underneath both the original stone vaults and new concrete vaults, the ground floor contains a series of living areas, a kitchen and a fireplace, with a series of small openings connecting to the garden to the south.

The ceiling above the ground floor is formed of vaulted concrete, which was chosen based on sections of brick ceiling found in the remains of the ruined building.

Seven bedrooms are organised on the first floor, with those in the building's eastern end cut through by light wells in their corners.

While some of these light wells incorporate glass floors, others feature balconies overlooking the ground floor that can be closed off with wooden shutters for greater privacy.

A spiralling metal stair leads to the second floor, where another living, dining and kitchen area opens onto an external terrace with expansive views of the landscape, framed by preserved sections of the original pillars restored using matching stone.

Other residential restorations recently completed in Spain include a renovation in Tarragona by Nua Arquitectures, which contrasted the building's original stonework with pastel-coloured steel elements.

Elsewhere in Spain, architecture studio Laura Álvarez Architecture built a holiday home from the walls of a stone ruin, which was designed to have minimal impact on its environment.

The photography is by Simone Bossi.