Architecture studio Nua Arquitectures has completed the renovation of an old house in the historic centre of Tarragona, Spain, reinforcing its worn structure with pastel-coloured steel.

Working with the house's owner, local studio Nua Arquitectures designed the revamp to allow the building, named Mediona 13, to either be used as a single large dwelling or three smaller units.

The poor condition of Mediona 13's old stone and timber structure required extensive reinforcement, but the studio sought to maintain as much of its atmosphere as possible, seeing the project as another layer to the visible "memory" of the home.

A distinctive colour palette of pink, blue and green was used to give the new steel elements a distinctive character, informed by the different hues found on each floor's existing wall finishes.

The steelwork is set against the original building fabric, including timber ceilings and rough stonework walls that have either been painted or left exposed.

"We kept as many elements as possible, not only for sustainability reasons, but also in an attempt to keep the essence and the atmosphere of the place," the studio told Dezeen.

"Our project wants to be another layer added to the building's history," Nua Arquitectures continued.

"To preserve the original wooden and ceramic floor slabs and the 'Catalan vault' stairs it was necessary to reinforce the structure with elements as light as possible." 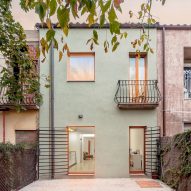 On the ground floor, Mediona 13 opens onto a large workshop space that looks out to a small rear courtyard.

The large entrance "gateway" is focused around a stairwell with pastel blue balustrades and overlooked by internal windows.

"The new gateway allows light to travel through the heart of the house, to an inner square that receives its inhabitants and transports them to their private units," said the studio.

Above, three floors contain three separate living units, with the uppermost level featuring a mezzanine with a bed that opens onto a balcony.

Each of these floors currently acts as a self-contained studio apartment with its own kitchen diner and bed area, but they have the potential to be transformed into rooms for a larger dwelling in the future, connected by the staircase at the front of the building.

Other recent Spanish house renovations featured on Dezeen include Majoral Tissino Architects' revamp of a home in Cruïlles that has a studio and secluded terrace, and the Sant Daniel House by SAU Taller d'Arquitectura that has a double-height living area.

In a recent Dezeen lookbook, we rounded up ten other home interiors that make use of pastel hues for a fresh, calming look.

The photography is by José Hevia.