Architecture studio Snøhetta has designed a table made of wood sourced from the bottom of a lake in Tasmania, Australia.

Named Intersection Table, it was made of Tasmanian oak that was sourced from bottom of Pieman Lake in Tasmania by Hydrowood – "one of the world's first underwater forestry companies".

Snøhetta decided to make the table from underwater timber as part of an ongoing project to explore using less-used materials.

"As part of Snøhetta's ongoing exploration of defining valuable use of new and forgotten material technologies, the worktable is the first exploration into wood aged at the depth of a lake for decades," Snøhetta Australasia managing director Kaare Krokene told Dezeen.

The oak has been underwater since 1986 when Pieman River was dammed as part of a hydroelectric project.

Forests in the area were logged ahead of the project to gather as much timber as possible before the submersion, but time constraints meant that much timber was left.

The five-meter-long Intersection Table was made from the timber as a "one-off piece that does not pander to consumerism" that has a form that aims to represent the "endless Australian coast".

"Starting from the concept of intersections, Snøhetta investigated the potential and limitations of materials unique to the Australian continent; juxtaposing textures, and intersecting planes," added Kaare Krokene. 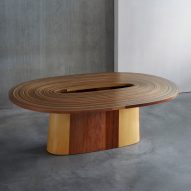 It was developed by Snøhetta's Adelaide and Oslo offices and was handmade using traditional woodworking techniques.

Intersection Table has been shortlisted in the furniture design category of this year's Dezeen Awards. Other projects in the running include Low Collection by EBBA Architects, Petra Table by Peca and ReFramed Bed System by Tim Rundle Studio.

The photography is by Grant Hancock.