Located on a former military site, the project forms part of a wider scheme to develop an area on the northwestern edge of Laval, which also includes a 250-metre-long outdoor velodrome and the landscaping of the surrounding wetland and woodland.

Drawing on this rapidly-changing natural site, Hérault Arnod Architectures adopted a flowing, organic form for Espace Mayenne that appears to change depending on the direction from which it is viewed.

"This is an area undergoing change," the practice said. "The building's organisation respects the landscape structure and the memory of the site, combining ecology, compactness, economy of means and the creation of a mass plan saving parcels for future programmes."

Espace Mayenne combines three venues; a gymnasium with a climbing wall, a conference hall and a stadium-like space seating up to 4,500 people that can be easily converted to suit sports games or concerts.

The three venues are united by two atrium areas on the lower ground floor and ground floors, separating the entry routes for technicians, staff and artists, and public audiences.

Sweeping around the southern side of the building, the ground floor atrium is lined entirely with glazing to open the building up to the landscape, with a ceiling of pale timber slats that follow the flowing form of the exterior.

"[The lobby's] organisation allows a fluid circulation of the different public flows according to various scenarios of occupation – the three venues can be in use at the same time or not," said the practice. 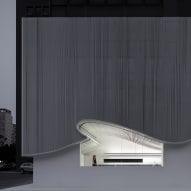 The largest space, the Grand Hall, is designed to be easily convertible from a sports arena layout with bleacher seating around its perimeter to a performance layout, with a stage along its northern edge framed by the drawing of diagonal curtains.

A range of wall finishes for the hall were designed in collaboration with acoustic designers Sempervirens, including corrugated concrete and wool felt wall finishes and hundreds of small wool felt panels organised in a geometric pattern on the ceiling.

Surrounding the exterior of the building is a skin of aluminium panels with three horizontal bands of different textures, sitting above a wood-clad base and to the west extending downwards to cover the outer wall.

"The facade is like a skin wrapping itself around the rooms, resulting in a shifting shape that constantly changes depending on the viewpoint," said the practice.

"It is composed of three horizontally stacked stripes that deform themselves in order to envelop the volumes as tightly as possible," it continued. "[They] overlap and rotate around the building, generating fluidity, unity and movement."

Other recently completed sports centres include the pre-engineered, metal-clad Obama Sports Complex in Los Angeles by SPF Architects, and the Cárdenas sports complex and skate park in Mexico by Quintanilla Arquitectos.

The photography is by Cyrille Weiner.