Hospitality brand Edition has teamed up with Japanese architect Kengo Kuma to create a luxury hotel filled with plants in the Toranomon district of Tokyo, Japan.

Occupying the upper floors of a high-rise building in the Tokyo business district of Toranomon, the 206-room hotel is the first outpost in Japan for the Edition brand, which partnered with architect Kuma on the interior design.

The heart of the hotel is a two-storey lobby space bursting with plants, which guests arrive at after taking the elevator up to the 31st floor.

"I wanted to prove that it was possible to create a real oasis at the heart of the big city," Kuma told Dezeen.

The large, open atrium, which draws from the layout of Buddhist temples, contains a bar, restaurant and numerous different seating areas – many of which provide impressive views out across Tokyo.

The double-height space is broken up by several large beams covered with wooden slats, which also adorn the ceiling of the space.

"The beams are primarily parts of the structure, but we didn’t treat them in a way that might disturb the interior," Kuma said.

"Rather, we took advantage of the beams, covered them with wooden louvres and elevated their existence to a symbol of the hotel."

The abundant use of wood continues throughout the hotel, including the bedrooms and 22 suites, where Kuma also introduced sliding screens.

"In traditional Japanese houses, movable partitions are often applied to enhance flexibility in the interior, and we extended the idea to the rooms at Edition," he said.

The hotel largely sticks to the neutral colour palette and natural materials such as marble and wood that are characteristic of the Edition brand.

Vibrant pops of colour have been introduced in the two restaurants, which are helmed by Michelin-starred chef Tom Aikens.

The aptly named Blue Room, which occupies one side of the lobby space, features upholstery in deep hues of sapphire.

The Jade Room, which adjoins the lobby, swaps the blue for vibrant shades of green and opens onto a verdant terrace overlooking the red-and-white Tokyo Tower landmark.

"It’s unusual to provide a green terrace on top of a high-rise building, but we dared to do so in order to connect the indoor and outdoor in a most natural way," Kuma said.

Other hotel amenities include a swimming pool, spa and conference spaces.

The less aptly named Gold Bar, which is situated on the ground floor of the building that houses the hotel, combines black walls, floors, curtains and furniture with a white vaulted ceiling. An artwork hung above a fireplace on one side of the room is the only significant golden addition to the space.

The hotel, which opened last year, is the first of two Edition hotels planned for Tokyo, with a second hotel in the Ginza district of the city set to open soon. 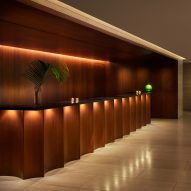 The Edition brand is a partnership between Marriott International and renowned hotelier Ian Schrager, who is best known for co-founding the infamous nightclub Studio 54 in New York City in the late 1970s and 1980s.

"I became acquainted with Ian in the 80s when I was studying in New York, and have admired his philosophy and sensitivity ever since," Kuma said. "I believe our chemistry worked well and we could work together without much talking."

While the Tokyo Edition in Toranomon is the first Edition hotel in Japan, Japanese design has had a significant influence on Schrager's work, according to the hotelier.

"I have always had a spiritual connection with the approach and aesthetics of Japan," Schrager said. "Their rationality, their simplicity, and their restraint has been the foundation of everything I’ve done."

"They are truly original thinkers but execute their ideas in such a humble and modest fashion," he continued. "The end results are bold yet refined and shouts in a quiet way. It’s a sweet spot that is completely seductive for me."