Cooper and his business partner Sam Trude recently opened Great White Melrose as their third and largest location in the city, following outposts in Venice Beach and Larchmont Village.

On the site of a former laundromat, the 5,000-square-foot (465-square-metre) restaurant was designed by Cooper and his in-house team. Along with its casual menu by chef Juan Ferreiro, the space combines influences from coastal cultures in Australia, Mexico and Europe.

Dining is available on a partially open patio facing the street, beneath a roof of slatted panels between weathered timber beams.

Pink fireplaces face each other across this area, which is lit with a soft glow from large woven pendants found in Pakistan.

"Completely visible from the street, the open concept was developed very intentionally to create a relationship with the neighborhood, the antithesis of the way so many Los Angeles – and specifically West Hollywood – hospitality venues operate," said the restaurant team.

Guests arrive via a ramped cobblestone walkway that passes through a procession of pink arches, each draped in greenery and featuring sconces built into the plasterwork.

The colour was chosen to match the home where Cooper grew up in Australia, adding "a sentimental touch" to the project.

The reclaimed cobblestone flooring sourced from Germany continues inside, where pink is swapped for neutral tones and a focus is placed on craft.

A bar made from Portuguese limestone runs along the back of the space, with arched niches behind displaying wine bottles on wooden shelves.

On the main wall hangs a large painting by Berlin-based artist Danny Gretscher that brings hints of the colours found outside into the room. 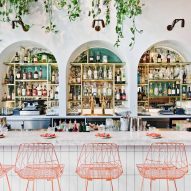 Six of the best restaurant interiors in California

Rattan chairs and brown-toned seat cushions found across both echo the laid-back style typically found at hospitality venues in the Mexican resort of Tulum.

"Our West Hollywood location is an extension of what we've found to be a successful formula that considers all of the necessary elements for an unforgettable dining experience," said Trude.

Great White Melrose combines "interesting art, design, architecture, music, and a variety of options as it pertains to both food and beverage that feature the best ingredients and an ever-growing list of talented makers", he added.

Melrose Avenue is a popular destination for tourists and locals alike, thanks to its wealth of boutique shops like Forte Forte, eateries such as the now-shuttered Auburn and design galleries including Francis Gallery LA.

"I have always enjoyed this part of West Hollywood, which seems to seamlessly connect all of the different worlds within it such as entertainment, nightlife, tourism, etc," said Cooper.

"There is a real energy about this space and the surrounding area and we are excited to tap into that with Great White Melrose."

Other hospitality projects to open recently in LA include Hotel Per La, designed by Jaqui Seerman in a neoclassical building.

Last year, we rounded up six of the best restaurant designs in California.