Board-marked concrete and exposed brickwork have been used to give a "rough but refined" character to this home in the Belgian countryside, designed by local practice A2o architecten.

The Hasselt-based practice designed House Be to provide a distinctive but harmonious counterpoint to its extensively landscaped surroundings, with internal courtyards and a covered kitchen terrace that allow the garden to "extend into the building."

"House Be is an experiment in dwelling in and amongst nature," explained the practice. "A rhythmic structure in concrete, wood and brick contrasts with the frivolity of the restored landscape."

"In a similar way to the Romantic motif from the 19th-century arts, an attempt was made to create a sensitive tension between a sublime natural landscape and the human presence in it," it continued.

House Be is comprised of three main elements – a glazed "garden room", a bedroom and office block and a separate guest annex, all of which are united by paved paths covered by an arcade of wooden columns.

Set amid a large garden landscaped by studio BURO Landschap, the exterior is defined by a concrete frame, custom-made grey brickwork and large windows.

"The facades look natural and nuanced, the roofs are overgrown with flowers and plants and the garden extends into the building structure, [changing] the appearance of the facade throughout time and seasons," said the practice.

The double-height garden room is House Be's primary living area, with glass doors opening onto two terraces, one overlooking an internal courtyard and the other containing the outdoor kitchen. 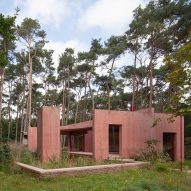 Both the structure and furniture were treated as almost sculptural elements, with board-marked concrete columns framing a central wooden dining table and seating area beneath a monolithic concrete fireplace and sculptural brass light fitting.

"[The garden room is] furnished as a contemporary 'Wunderkammer'," said the practice.

"Think of it as an art cabinet, like those that can be found in the old mansions of dignitaries and freethinkers, where the most extraordinary art and nature objects were brought together and displayed in one room," it continued.

The ground floor of this living area connects to a kitchen at one end of the office block. Above, a secondary living area or "night hall" sits on a mezzanine, connecting to an additional external terrace and the home's bedrooms.

Below, a basement space contains a wellness area and bar where sliding glass doors open onto a Japanese garden courtyard designed as an "intimate counterpart" to the large garden above.

A freestanding spiral staircase of black steel links the three levels of the garden room, while an additional staircase connects the bedrooms directly to the home working spaces.

"The rooms are oriented differently each time, which means that the incidence of light and the view of the outside varies," explained the practice.

"The route to the workrooms and the night hall on the other floor deflects from the central axis, thus keeping private life separate," it continued.

Other homes in Belgium recently featured on Dezeen include an angular brick house by DéDal Architectes, and a curving brick home in Ghent designed by BLAF Architecten in the grounds of a 19th-century mansion.